American Idol 7 - Not Better Than Cats 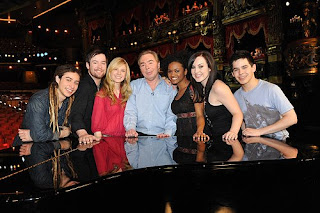 Andrew Lloyd Webber? Really? On American Idol? Ooookay. The diminutive English theatre wizard mentored the Top 6 on his West End/Broadway classics, and was not afraid to tell them they picked the wrong song or were screwing it up. When you're a Lord, you can do that kinda thing. There were some unexpected song choices by the contestants and the final four (yes, four) revealed themselves tonight: the two Davids, Syesha and Carly. Read on.

Syesha Mercado: No doubt about it -- her best performance ever on Idol. Singing One Rock n' Roll Too Many, a sassy, but not very well-known tune from Starlight Express, Syesha slinked around the stage in a tight red dress and did her best Michelle Pfeiffer-humping-a-piano-in-The Fabulous Baker Boys routine. She could definitely be a Broadway star. Totally safe.

Jason Castro: Janice Muppet had never seen an Andrew Lloyd Webber show and wasn't very familiar with the songbook. Besides being a dopey stoner, he was also a total moron. Lord Andrew subtly tried to talk him out of the song by calling Memory from Cats a "brave choice," which is a nice way of saying "you're totally going to fuck this up." And did he ever. With a half-lidded grin at the camera, he was like, "Uhhhh...I didn't even know it was sung by a cat." Ugh! He sorta talk/sang it, was flat, couldn't find the melody. A nightmare, train wreck, run toward the light Carol Ann performance. Bottom three, probably going home. However...

Brooke White: It will be coin toss between Jason and Brooke after her disastrous take on You Must Love Me, the song Webber added to the film version of Evita to give Madonna a glory moment (not to mention an Oscar for Best Song) for Eva Peron's death scene. Brooke, who also seemed completely unaware of Webber's catalog, was chastised by ALW for "not having a clue what the song was about." Strike one. Then at the beginning of the performance, she forgot the lyrics and had the band start again. She was trembly and tense the rest of the song. The judges were incredibly nice, because it was just tragic. Strike out.

David Archuleta: He chose to sing Christine's power ballad Think of Me from Phantom of the Opera rather than the expected Music of the Night (the other David did it...more on that in a second). ALW told him to keep his eyes open when he sang, and Little D. just managed it. The vocal was technically perfect, Randy said it was the bomb, the girls screamed and Simon, rightly, called it forgettable. Tomorrow night's shock: The little Terminator's first appearance in the bottom three.

Carly Smithson: She had planned to sing All I Ask of You from Phantom of the Opera, but ALW talked her out of it and steered her to the title song of Jesus Christ Superstar. She totally rocked it out...took it to church. And middle America will love that she sang about Jesus. Sailing on through to the Top 5.

David Cook: ALW didn't think Mr. Smugs was going to be able to work the song out, but rather than turning it into a frat rock screamer, he sang a straightforward version of Music of the Night. You could hear all the girls heaving a sigh of love across the nation. Hell, I even thought he did a good job and I can't stand this guy. Cook also has something else to be smug about: the album he released before he went on Idol went to number one on Amazon.com, before it was quietly pulled this week. He's going to be a star whether he wins Idol or not.

Lisa Nanette Allender said…
I'mmissing all the fun!
I love your recaps, Coll....You really cannot stand David Cook, can you?
12:25 AM

C. Dale said…
As always, you were dead on! Janice needs to go. His performance was a stinking mess. Awful. One of the worst Idol performances I have ever seen. And I fear you are also correct in the Archuleta prediction. He is going to discover what it means to be bottom three this week.
12:32 AM

Anonymous said…
i am so not a drama fag. This whole show was boring as hell but you are right about the bottom three. Time to give the little closet gay a scare and i could care less if they send Jason or Brook home. They were both terrible.

Kate Evans said…
I was shocked that Archuletta went pop with his Broadway song. I think he was too afraid of revealing his inner fag. I thought he was so boring; I was incredibly disappointed that he didn't belt out an ALW song ala Broadway.

Lydia said…
Just found your blog via the Untalented Writer blog. Impressive, very. You're going into my bookmarks and I'll be curious to know more about After the Poison.

Your astute take on Idol is great, and my husband would agree with you about David Cook (but I like him!). Tonight I liked Syesha best, and I wish Carly had sung "Don't Cry For Me, Argentina." But I'm rambling . . .
3:24 AM

ButtonHole said…
Lord, fans piling up in droves, Collin. You're a force of nature, all are to't!

But accolades are well-deserved!
1:08 PM