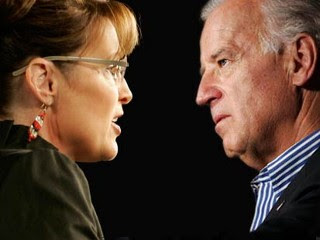 Lisa Nanette Allender said…
I was stunned that SP could keep talking. I literally lost track of what she was saying, several times. It sounded like several incomplete sentences. Or something.
Biden was beautifully SPECIFIC. Something neither John McCain or SP have ever been able to do.
11:23 PM

Kate Evans said…
The most disturbing part of the whole debate was when she talked about wanting more power as VP. She's Cheney with lipstick.
11:35 PM

Anonymous said…
Biden totally won this. She didn't piss on herself and foam at the mouth but Biden cleaned her clock.

Anonymous said…
Think I'll sit on the JOHN after this one.

Peter said…
This comment has been removed by the author.
12:26 AM

Peter said…
When she asked, "Can I call you Joe?" He should have answered, "I prefer Vice President Biden."
12:27 AM

Rachel Mallino said…
I watched it on CNN. com live, here at the b&b - I couldn't believe she came out the door and asked if she could call him "joe" - (Peter's reply was hysterical!!!)

Biden SO won. Was it just me, or did he get choked up when talking about being a single dad? I almost started crying.

Palin saying that she was not going to answer the questions the way they wanted her to, really meant she wasn't going to answer them at all, but instead vomit more McCain rhetoric. And while she didn't drool on herself, she still lost. Biden brought it to her DOOR with facts, facts and more facts - I loved it.
10:07 AM

stacebro said…
You know, I'm amazed (and not a little distraught) that the fact that she didn't implode or self-combust or throw out one of her witty Palin-dromes meant to so many pundits that she "did well." How low is the bar when we consider a person regurgitating coached material--and refusing to answer direct questions--to be success? Or a sign of intelligence? Shudder.
10:22 AM

Emily A. Benton said…
I was laughing so hard when she said "leave" instead of "lead"!!!

Collin Kelley said…
And many of us know a moron when we see one, gosh darnit.
10:58 PM

god, i hope we are not stupid enough to go for this.

collin, i wanted to "watch" your liveblog of this but for some reason the posts weren't downloading (i read you via RSS on my iphone, lazily, in bed) (which is where i watched the debate). all your other posts have come over just fine, though.
5:10 AM