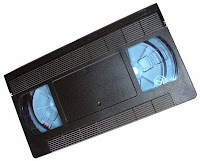 VHS is dead, according to the LA Times. The last remaining VHS tapes rolled out of a Florida warehouse at the end of October. I still have a VCR, but it's unplugged and gathering dust in my entertainment center.
Over the last few years, I've systematically replaced all my favorite films with DVDs. However, I still have a handful of movies that have yet to make their appearance on DVD. The most criminal of these (Rebecca Loudon will surely agree) is 32 Short Films About Glenn Gould, which came out on DVD in Canada, but was quickly pulled. Copies are selling for well over $200 on eBay. It's time for a reissue! Are you listening, Criterion Collection? I also have a number of music video collections on VHS including Talk Talk, Marianne Faithfull's incredible concert film Blazing Away (my second most-wanted DVD), Berlin and Kate Bush. Luckily, most of these are available on YouTube and I have quite a number of bootleg DVDs.
But what to do about all those tapes recorded from television? I have hours and hours of old MTV (when they used to play music videos) with shows like 120 Minutes and AMP. I also have about six tapes worth of Princess Diana's funeral and related coverage. And then there's the videos from my first couple of trips to Europe. Those are the most precious. I'm actually taking them over to CVS (drug stores are so helpful these days) to have them converted to DVD this weekend. I've thought about buying one of those VHS/DVD recorder combos and transferring all my tapes, but once that's done the machine is useless. So, I'm going to start a "keep pile" of VHS tapes and throw the rest out. It's the end of era.
My review of Carrie Fisher's memoir for "Read This" is delayed, but coming soon. Tonight...maybe.
Email Post
Labels: 120 Minutes 32 Short Films About Glenn Gould AMP DVD Kate Bush Marianne Faithfull MTV VHS tape

Lisa Nanette Allender said…
I read this column, and then reached the end where you said you will"do a keep pile, and throw the rest out."
I don't know HOW to throw anything I love, away.
I've got gazillions of things on VHS. I suppose it's time for a sorting.
1:39 PM

Radish King said…
Yes. And also At Play in the Fields of the Lord, a 2 VHS movie, that I'm watching this weekend.
3:40 PM

Radish King said…
ps. I'm keeping mine as long as my VCR works. I don't have many movies, but the ones I have I love, Pee-Wee Herman's Playhouse (all of them), Pee-Wee's Christmas Special, The Crying Game, Prick Up Your Ears, Camille Claudel, Short Cuts, At Play in the Fields of the Lord. All good movies, some replaceable if I ever have the money to replace them. Right now I don't.
3:43 PM

Collin Kelley said…
What a coincidence, Rebecca. I just got rid of The Crying Game, Camille Claudel and Short Cuts on VHS because I have them now on DVD. I can't believe At Play in the Fields of the Lord isn't on DVD yet either. Despite the reviews, it's a favorite.
8:28 PM

Anonymous said…
It's so funny you would write about this. I took 120 VHS tapes (my entire collection) to Goodwill today - all the Disney movies and all of the kid TV videos. I called beforehand to ask if they took VHS tapes.
MAG
9:14 PM

ButtonHole said…
I've still got about 40 Beta tapes with home movies on them. The Beta machine bit the dust YEARS ago....Do you think anyone transfers Betas to DVD?
10:34 PM

Collin Kelley said…
There are dozens of companies online that will do a Betamax transfer to DVD for you. If you do some Google searching you can probably find one locally.
11:04 PM

Levari said…
VHS becomes the LP of my generation!

Happy New Year to you and yours Mr. Kelley. The Best of everything to you.

jaxx said…
my mother calls her DVDs "tapes" and was very confused by the fact that DVDs don't need to be rewound. she has one of those VHS-to-DVD units where she could supposedly convert tapes to DVD, but as my mother still has difficulty changing channels on the TV, and doesn't have so many VHS tapes in the first place, we're not even going to try to show her how to do it. shame on the salesman who convinced her to get that unit -- she probably thought she couldn't watch movies at all unless she had a "tape" device.
6:42 AM

Pris said…
I can identify with this. Bit by bit I've gotten rid of all but a few VHS movies and replaced ones I like with dvd's. My biggest problem is home movies on VHS. I know I can get them copied onto dvd's for around 200 plus dollars (yes there are tons), but when I first got that old webcam I recorded so much boring stuff along with the good stuff that I hate to just have them 'blanket copied' but who's going to have the energy to monitor and trim that much tape?? Gads. Details of unwrapping Christmas presents next door, person by person, bow by bow, paper by paper, delightful expression by delightful expression...how did I do that?

I won't even get into the pile of LP's my husband and I haven't parted with yet.
7:48 AM

Rupert said…
I'll never forget that early 80s pinch-yerself-rush that you could now watch classic films at home - I remember Days of Heaven and Breathless in particular - the world had suddenly changed . . .
9:03 AM

Does everyone remember the first movie you rented? Mine was Educating Rita.
9:19 AM

Collin Kelley said…
I don't remember the first movie I ever rented, but I do remember that my parents bought a VCR for Christmas in 1986. It was gigantic! Apparently there was some deal that year if you bought a VCR you got a movie with it, and that happened to be "It's A Wonderful Life."
10:11 AM

Pamela Johnson Parker said…
I first played a tape on a VCR while I was housesitting in the mid 1980s. The movie was in a brown-black box the color of a cockroach's carapace and was hand-labeled PINOCCHIO. It wasn't exactly from the Disney stockpile, as I had expected, but it was, well, animated.
8:42 AM

Collin Kelley said…
Ah, yes, the mislabeled porn...I had a few incidents with that myself back in the day. :)

I remember when one of my best friends first got their VCR. It must have been around 1983 or 84. It was gigantic thing and you loaded the tapes in from the top. It might have been a Betamax now that I think of it.
8:55 AM

Emily A. Benton said…
hehe I love that Rebecca has all the Pee Wee's Playhouse VHS! we watched those at my place over Thanksgiving. definitely worth collecting.
4:13 PM

Collin Kelley said…
Oh, Button, you'll be happy to know that CVS and Walgreen's and Ritz/Wolf Camera (select stores) not only offer VHS to DVD, but also Beta to DVD. The cost is $29.99 to convert two tapes to a DVD if both tapes run about two hours each. Check online and see if a store near you offers it. This website is the one to check: www.yesvideo.com.
4:49 PM

Karen J. Weyant said…
I just read through your comments -- I'm glad to see that I'm not the only one who simply cannot part with her VHS tapes!
5:48 PM

Ruby said…
VHS tapes may be dead, but the memories of them definitely aren’t. I feel like in the future, owning a VHS tape and a VHS player would be a thing among vintage item collectors, and will also definitely bring back all the great memories from the past. 
Ruby Badcoe