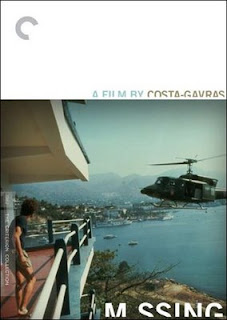 The Criterion Collection is known for its lavish re-releases of classic films on DVD, usually with an extra disk with hours of bonus features and a booklet of essays and photos. Early in the fall, Criterion released Costa-Gavra's 1982 masterpiece, Missing, starring Jack Lemmon and Sissy Spacek. It's the true story of journalist Charles Horman, a US citizen who "disappeared" in Chile during the 1973 American-backed coup that ousted democratically elected Salvador Allende (who happened to be a socialist, and Nixon wasn't having any of that) and installed military dictator Augusto Pinochet. Horman was in Vina del Mar with journalist Terry Simon, where they happened to be staying in the same hotel as the CIA agents and military intelligence personnel who were helping to plan the coup. Believing Horman knew enough to expose America's involvement, the military junta ordered him arrested and executed, while the American government looked the other way.
In the film, Spacek plays Horman's wife, Beth, and Lemmon is his father, Ed, a conservative Christian Scientist who naively believes America would never dirty its hands in coups and the murder of its own citizens. When Ed arrives in Santiago, Charles has already been missing for two weeks and Beth has been given the runaround by the US consulate and the military government. Ed believes he'll have the issue cleared up in a few days and that his son's arrest was a mistake, but soon learns what Beth has already figured out -- something stinks, and it's the American government.
Missing plays out almost like a documentary, which is what Costa-Gavras intended. Lemmon and Spacek are magnificent in this, at first sparring over Beth and Charlie's liberal leanings and "wayward" existence, but then bonding as the realization that America is complicit in Charles' disappearance. Costa-Gavras used Mexico City for Santiago and the Mexican government supplied real troops, giving the film an extra realism. There are several memorable scenes that will send chills up your spine, including Beth desperately trying to avoid being picked up by the military when she misses curfew. The streets are littered with bleeding bodies, gunshots ring in the air and as she hides in a doorway, a magnificent, riderless white horse comes galloping down the wide boulevard pursued by a jeep full of military goons.
The disk of supplemental material clocks in at nearly three hours and is just as fascinating as the film. There are interviews with Costa-Gavras, an interview with the real Beth Horman (who goes by Joyce) with images of their life in Santiago and a documentary about the Hormans' pursuit of the truth in the death of Charles Horman. At the film's release, the US State Department denounced the film as lies, and despite the Hormans' pleas would only release a few pages of heavily redacted documents as it continued to try and distance itself from the coup. It wasn't until 1999 that declassified documents were released showing America's complicity in the coup and that it turned a blind-eye to Horman's death. The memo's described the Horman case as "bothersome." Missing remains timely because our current administration is complicit in human rights abuses around the world -- from torture and illegal detention to the killing of civilians in "peacekeeping" missions. In 20 or 30 years time, I have a feeling we're going to be seeing many declassified documents showing just what eight years of Bush cost to innocent people around the world.
Email Post
Labels: Charles Horman Chile Costa-Gavras coup Criterion Collection Jack Lemmon Missing Sissy Spacek

Dustin Brookshire said…
I'm going to have to watch this movie.
8:40 PM

Anonymous said…
Allende committed suicide rather than be captured and executed by the military, so they also basically murdered him and the US let that happen.

Karen J. Weyant said…
I've seen this movie -- it is really underrated. Thanks for posting this.
9:58 PM

Pamela Johnson Parker said…
I remember how compelling Missing is. I think Spacek was extraordinary in this movie. She didn't win the Oscar, probably because that was the year of Streep and Sophie's Choice.....Flash-forward to 2008: Streep's starring in Doubt; Spacek suffers in the mind-numbing Four Christmases. (Avoid that movie: Five Oscar winners are in the cast, and it's still horrid).
10:39 AM

Anonymous said…
Oh, I've got to see this. I can't believe I missed it back in 82. I was in college then, and had just learned about the CIA involvement in the death of Allende (Isabel Allende's uncle). When I told my father what I had learned, he shouted my down, told me I didn't know what I was talking about.

DCH said…
Somehow this brings to mind another excellent film in kind of the same category, "Eleni", with a young John Malkovitch.
5:19 PM

Collin Kelley said…
Eleni is a brilliant film. Kate Nelligan is also fantastic, and so is Linda Hunt.
8:00 PM

Kristin Berkey-Abbott said…
I remember seeing this film when it first came out. My friends and I tried to get into "Making Love," but we couldn't, because it had an R rating, and the theatres in Knoxville, Tenn. were very serious about keeping underage people out of R rated movies.

So, we saw "Missing," instead. What a powerful movie. Certainly a longer lasting effect on me than most R rated movies I've seen.

Later, I did see the movie we weren't permitted to see--certainly not as radical a movie as "Missing," the one we got into with no problems.
5:41 AM