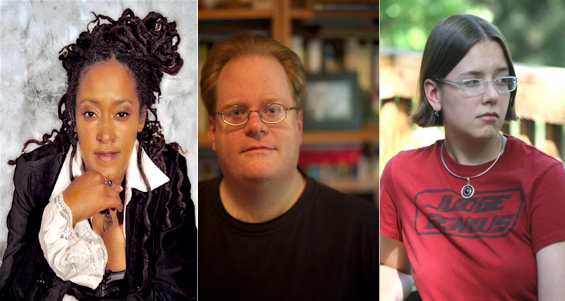 Charis Books & More will celebrate the American Library Association's Over the Rainbow Book List with three of the honored poets named to the 2014 list: Theresa Davis (After This We Go Dark), Collin Kelley (Render) and Megan Volpert (editor of this assignment is so gay: lgbtqi poets on the art of teaching). The reading is Wednesday, March 12, 7:30 p.m. at Charis, 1189 Euclid Ave. in Atlanta.
The Atlanta-based writers, all published by award-winning Sibling Rivalry Press, join 68 other authors from around the country whose fiction, non-fiction, drama and poetry were chosen by the Gay, Lesbian, Bisexual & Transgender Round Table of the American Library Association. The titles selected for the Over the Rainbow Book List means the work will join the collections of hundreds of public libraries across the nation.
Theresa Davis won the 2011 Women of the World Poetry Slam and was named the McEver Chair in Poetry at the Georgia Institute of Technology. Davis is the author of the chapbooks Head Games, Torn, Rock Star Poet, The Truth About Jaguars and Simon Says, which was published as part of her tenure as winner of the Atlanta Bureau of Cultural Affairs Emerging Artist in 2012. A regular on college campuses and reading series all over the country, Davis' first full-length collection, After This We Go Dark, has just been published by Sibling Rivalry Press.
Collin Kelley is the author of the poetry collection Render (Sibling Rivalry Press), which was named one of the Atlanta Journal-Constitution's Best Books of 2013. His other poetry collections include  Better To Travel, Slow To Burn and After the Poison. He is also the author of the novels Conquering Venus and Remain In Light, a finalist for the Townsend Prize for Fiction and runner-up for the Georgia Author of the Year Award for Fiction. Both novels have just been re-released by Sibling Rivalry Press in new paperback and eBook editions. He is working on a third novel, Leaving Paris, which will be released in 2015.

Megan Volpert is the author of the brand new poetry collection Only Ride and is the editor of the acclaimed this assignment is so gay: lgbtqi poets on the art of teaching, both from Sibling Rivalry Press. Her other collections includeSonics in Warholia, The Desense of Nonfense, Face Blindness and Domestic Transmissions. She is currently researching rhetorics of independence during the American Bicentennial in 1976. Volpert holds an MFA in creative writing from Louisiana State University and has been teaching high school English for the better part of a decade.
Email Post
Labels: 2014 American Library Association Atlanta Charis Books Over the Rainbow Book List poems Poetry Sibling Rivalry Press