A review of "Midnight in a Perfect World" 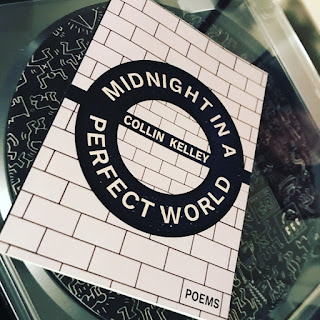 Award-winning, London-based poet Agnes Meadows not only wrote a blurb for the back cover of my new poetry collection, Midnight in A Perfect World (out today from Sibling Rivalry Press), but she also wrote the very first review. This was totally unsolicited and I was absolutely gobsmacked and overjoyed by her praise and insight into this collection. I look forward to reading with Agnes next year in London. In the meantime, here's her review.

I have always admired Collin Kelley’s competence as a writer and poet, his ability tap into the broad range of emotional panoramas we embrace as humans, and to describe the highs and lows of life’s rich and varied panoply.  So I was looking forward to reading his latest collection ‘Midnight In A Perfect World’, which promised a full and satisfying meander through Kelley’s latest observations and experiences.

This new collection of 32 poems and short prose pieces comes in two parts, and charts a host of journeys both emotional and physical which Kelley describes in his usual pin-sharp fashion.  Part One – The Urge for Going – describes a wealth of emotional encounters which ultimately spur the writer to leave his home town of Atlanta, USA, and head for London, while Part Two – This is Not America – explores some of the things that happened when he reached England.

It is an achingly emotional collection, filled with love, disappointment, betrayal, loss, and lack of and yearning for love.  It does more than tear at your heart-strings…it plucks them out altogether, leaving you saddened that a man with so much to offer apparently received so little of what he desired most.

In the prose piece Strange Weather, Kelley describes in simple but effective language that ultimately love is a lie and a convenience, an emotional e scape from reality, sex the lubricant oiling the passage of time and distance, but culminating in silence.

“Then we are alone in the room, naked on the bed.  At least your kisses seem realistic, hungry from distance, but then we both say I love you, which is a lie, but part of the game as you pin and enter me…..This long distance fantasy should have been left to midnight calls, pinging texts, our cries and whispers bouncing off towers and satellite relays, up in the clouds where our heads have been.  Later…it’s raining again in Manhattan, a lone rumble of thunder like a bell tolling underwater, and I find myself in that odd purgatory of mourning something that never was.

And it’s the same message of abandonment in Revenant, which writes about an old, temporarily rekindled relationship, with the final stanza explaining

Love does not remain, but every now and then
some random man will touch me
in just the right spot, whisper his desires,
and you will surface, a revenant
impervious to exorcism,
when I call someone else’s name.

Ouch!  No wonder the Victorians referred to orgasm as the little death.

The poem What I’m Wearing, poignantly describes telephone sex, those nameless, faceless encounters which question the fear of both alone-ness and connection.

I’ve got a fire sale cooking in my head, sticking my fingers
In and out of the flame until they blister, until the feeling comes back.
Who else, what else, must go until I’m naked,
so when ask the question again I’ll be unburdened, invisible,
dematerializing into dust that catches the first strong wind
blowing east out over the water to elsewhere.

This and other poems like Things to do In Denver When You’d Rather Be Dead… and Another Moniva Belluci Dream continue to be raw expressions of soul-deep loneliness and empty desire.    In the latter, particularly, the loss and desperation are even more keenly described, revealing a loneliness running so deep it begins and ends in a hunger so intense it borders on self-loathing….

I feel a pervasive melancholy, not only for things lost,
But of things to come that will also be lost….
I scrub my flesh until I am a pale version of my former self.
A vestige.  A cheap copy.
I go to bed hungry, chewing the inside of my cheek
until I taste blood.
My teeth are puzzle in my mouth.

Part Two – This Is Not America – describes Kelley’s time in England, and the hope that things will be different if he returns to London, where he has known happiness, however insubstantial and fleeting in the past; the talismanic hope that whatever it is he thinks he needs/wants to fill the hollow inside, will be found there.  But it doesn’t take long to discover that this is an illusion, a pipe-dream, touched on more with irritation than yearning in Room 335, Royal National Hotel,

Some of the lines in Rochester Station, are both poignant and beautiful.

….and I am in front of Rochester Station,
The clickety-clack of the London train disappearing,
Depositing me in dreamlands,
And the tears come so unexpectedly that I choke,
Turn my face to the whitewashed stone,
Pray for inheritance or lottery, anything
To make this permanent.

It’s a poem expressing more than sex and chance casual enters, the yearning for completeness a constant, the desire for wholeness and permanence.   However, Kelley continues to explore the theme of love at a distance, and what we think we remember is often better than the reality, as in Nostalgia with short stanzas

The idea of you
perfect and acquiescing
sculpted, blond and grinning

Then you momentarily resurface
tangible, flabby and older
one wrong word and then another

More nostalgia is exquisitely expressed in Atonement, written in London, where he remembers the challenges of a past love.

Your death is a voice mail, left by another with a phone number.  The somber tone is unmistakable, a hush earmarked for the dead.  Four days gone – long enough to have shaken off flesh gravity – I expect your ghost to rattle the unearthly chains of your discontent.  Even when I skip the memorial, numb on the couch as twilight approaches, picking the memory of you like a scab, I realise that you are not so much a wound, but a scar that will never fade.

Much of what is conveyed in the poems of the second part of the collection are filled with a genuine desire to be in England, to live here, and the notion it gives the writer a sense of completeness and belonging that all the casual sex encounters wherever they are taking place don’t give him.

This is most movingly expressed in the title poem Midnight in a Perfect World,

….my American life drops away.
I blend, become unrecognizable…
My needled skin like sleeping limbs
as if this perfect night is a dream
rom which I never want to wake.

This is an excellently observed and written collection, taking you deeper and deeper into a world which you may never have encountered so closely or so intimately.  It makes you want to hug the writer, partly in congratulation at the extraordinary vividness of Kelley’s writing, but partly also for the bravery of his writing…the text of instant and ultimately empty instant gratification which he returns to again and again, together with the sub-text of yearning for constancy, for much more than what is being offered, and the pain and loss camouflaged in poetry.

This collection is by no means an easy read, but it is one that ultimately does an amazing job of opening your heart and mind to a different world/experience.  It’s hard to choose a single poem or piece that is my favourite, or that rises above any of the others.  It would be preferable to look at the collection in its entirety, with each poem/piece contributing to a poetic whole, particularly as they are all part of the writer’s emotional experience. It doesn’t ask for sympathy, but it does ask for understanding, and you would be remiss if you didn’t give it.
Email Post
Labels: Agnes Meadows book review London Midnight in a Perfect World poems Poetry Sibling Rivalry Press UK