Living with the Big C 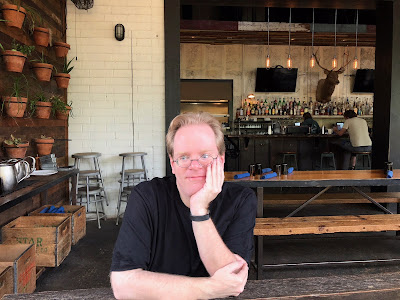 I didn't think my next update would take so long, but read on and you'll see why. In my last post back in April, I alluded to a health concern and my ongoing search for a condo. There's good news and bad news.
In mid-May I was diagnosed with cancer. What I thought was a recurrence of Bell’s Palsy turned out to be a tumor growing on my salivary gland, which compromised my facial nerve.
Within a matter of weeks, I was checking into Emory University Hospital in Midtown for an eight-hour surgery to remove the tumor, lymph nodes, and a nerve graft to, eventually, allow me to smile again.
When I came out of the surgery, I was stunned by the giant incision running down my neck and across my throat. It looked like my head had been cut off and sewn back on – think Frankenstein minus the bolts. But the aesthetics were secondary to the sobering fact of my diagnosis: the rare, aggressive adenoid cystic carcinoma.
My Emory team ruled out chemotherapy, since there’s very little evidence that it works on this kind of cancer. So, I’m about to begin six weeks of radiation at the Emory Proton Therapy Center. Unfortunately, radiation treatment is usually just a band-aid. Adenoid cystic carcinoma has a high rate of recurrence and when it does, it’s fatal.
Of course, it might be 10 or 20 years before it recurs. Or it could be five. Barring a heart attack, car accident, or plane crash, I’ll likely die of this cancer sometime in the future.
Or maybe not.
As my fantastic Emory team has said, there are new therapies and drugs in development. By the time I have a recurrence, the treatment might extend my life.
I decided at diagnosis that I wasn’t going to dwell on it. There’s too much writing, traveling, and fun still to be had. I’m giving myself permission to have a whopper of a mid-life crisis; I might even start a bucket list.
The week before my surgery, I closed on my condo in Midtown. Moving in after the surgery was a fresh hell, but I’m here and happy in my new nest. Being able to walk a block or two to everything I need – supermarket, drug store, restaurants, MARTA – is even better than living on the Atlanta BeltLine.
Although, I can walk pretty easily to the Eastside Trail if the mood hits. I’m also in walking distance to the Proton Center, not that I’m eager to make that trek, but at least it’s convenient. A couple of weeks ago, I walked over and had a mold made of my face for the radiation mask. That’s the closest I want to get to mummification.
Between the doctor’s appointments, tests, and dealing with insurance, my colleagues at Atlanta Intown magazine coalesced around me and made my recovery less stressful with help gathering the news and even arranging food deliveries. Thanks, y'all.
The outpouring of support and kind words from all my friends – both in person and online – has been so heartening. I cannot thank you enough.

rbarenblat said…
Thinking of you, and wishing you -- recovery, and comfort, and good adventures.
10:00 AM