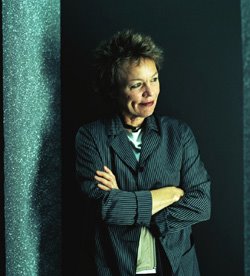 CATCHING UP: I realized today that I've never blogged about a couple of events that happened in the last few weeks: the Laurie Anderson concert last Friday and the reading at Sycamore Place Gallery on Oct. 29. Here's a quick recap.

Laurie's sold out, 90 minute show, The End of the Moon, was held at the Ferst Center for the Arts on the Georgia Tech campus. I attended the show with my best friend Tina, who first introduced me to Laurie back in the 80s. We knew it was going to be a great show as soon as we walked into the auditorium and saw the floor of the stage was covered in votive candles. There was a small screen showing a footprint on the moon, a big armchair and at center stage, Laurie's "work station" with her electric violin, keyboards, etc. There was no singing in this show, just stories and very dramatic, cinematic music. Laurie amplified her violin so it sounds like entire orchestras are playing. It's one of the most haunting sounds I've ever heard.

The stories were mostly built around Laurie's two-year stint as NASA's "first and last" artist in residence. Some of it was funny, some was sad, some was political. I think my favorite bit was the story about taking her dog Lolabelle to the California mountains and how the dog was almost attacked by vultures who mistook it for a rabbit. She said Lolabelle then realized that danger could come from the air, and thereafter she was always sniffing the air for a scent, and how this reminded her of the people in NYC after Sept. 11, when they realized danger could come from the air. Chilling.

Then there was the bit about the new space suit NASA was creating that would help astronauts pick up heavy objects and was full of tubes that could administer injections of medicine or morphine in case of injury. She said the suit would never go to space because it had been militarized to send to Iraq, and then she picked up her bow and launched into the most blazing violin piece. Brilliant stuff. Can't wait to see how she boils this show down in an album.

The reading for the Body Maps exhibit was not very well attended, but there were some lovely people in the audience. As always, it's a treat to perform with the great Alice Lovelace. She talked about her experience as an artist-in-residence at the Caversham Center in South Africa and how communing with the dead is still a part of her journey. In response to the exhibition, which featured 10 large paintings created by women living with HIV/AIDS in South Africa, I created a series of poems. Representatives from the National Black Arts Festival were in the audience and we discussed another reading in Summer 2006 when the exhibition returns. It was an honor to be asked to participate in such prestigious event. Here's the first poem in the series:

A boy was almost the death of me,
I fell in love hard, oblivious
to the 12 other girls he kept
in the dark, about each other,
about the firewater boiling in his veins.
My stepfather thinks me a whore,
for having a boyfriend. We do not speak,
not after that night.
When I came home happy,
even the buzzing flies were singing,
my baby growing inside.
I stepped into the fire, too young to know
how much it would burn,
ignorant of Joan of Arc.
My stepfather waiting in the dark,
a screwdriver behind his back,
"Come here," he said, "I want
to make you stronger."

The poems were written over a two week period, some while I was in San Francisco, which not only informed the writing, but my mood. My Uncle Terry loved San Francisco, contracted AIDS there and died wanting to return. San Francisco is the cradle of the AIDS epidemic in America, and the trip there, while not one of my best travel experiences, affected me deeply.

I'm feeling more introspective these days. I'm ready to hibernate for a few months and turn my attention back to the writing and looking ahead to my future. There is much to catch up on.
Email Post

Stranger Ken said…
The way you step into your character is really impressive. You catch the brutality of the situation, too, especially in the ending. Great poem. Will you post the rest of the series?
4:11 PM

Collin Kelley said…
Thanks, Ken! Glad to see you back up and posting. I'm not sure if I'll post the rest, because I'm not sure what the organization who wants me to perform them next summer wants to do with them. I don't want to put them out early, if they plan to do a chapbook, program, etc. I'll keep you posted!
5:21 PM