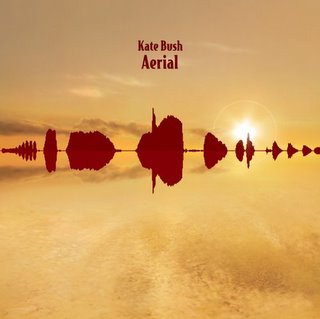 A SEA OF HONEY...A SKY OF HONEY: I've been listening to tracks from Kate Bush's new album, Aerial, all week courtesy of some British friends who got their hands on the tracks ahead of release (this coming Monday in the UK, Tuesday in the US). To say I'm overwhelmed, is the understatement of the year. This certainly rivals Hounds of Love as her finest work EVER. Divided into two disks (A Sea of Honey and A Sky of Honey), the first disk is individual songs, such as the first single King of the Mountain, How To Be Invisible, Mrs. Bartolozzi and the sublimely sad A Coral Room (a beautiful poetic epic that connects a drowned city to the death of her mother). The second disk, however, is the true masterpiece. A Sky of Honey is a concept album of nine songs all interconnected following a painter from dawn to dawn. It is thrilling. The layered, dense tracks are full of birdsong, driving beats and some of Kate's most vivid lyrics and vocals ever. I've been in a near trance like state for three days. Every second of the 12 years since the last Kate Bush album has been worth the wait. This is a staggering achievement.

On Saturday evening, I'll leave for London to join other Kate fans for a series of dinners and the launch party on Monday, Nov. 7 at The Ivy House. I'm so excited I could just about piss myself. I'll finally get to meet face to face with all these wonderful fans of Kate's music that I've been talking to for many years. We're all connected through her music, and finally, many of us will be in the same room listening to Kate's brilliant new album. I won't be blogging while I'm over there...it's going to be a whirlwind of a trip. But I'll have a full report (and hopefully a few photos) upon my return.

Don't forget this Friday (Nov. 4) is the next Poetry at Portfolio Center featuring the fabulous Jackie Sheeler and John Amen. Details are at www.collinkelley.com and www.portfoliocenter.com. If you've never heard these two, you are missing out.

I've been following the political scene, too. The Democrats forcing the Republicans to get a move on with the report about intelligence used for invading Iraq (I wonder why they're dragging their feet...doh!); Samuel Alito's bid for Supreme Court (I'm praying for a filibuster...this is Dubya's mea culpa to his Christian whackjob base) and the horrible rioting occurring in the suburbs of Paris after the death of two young boys being chased by police. The city of light is not always so full of light.

Anonymous said…
Have a fab trip to London! Sorry to have missed you in LA!

Peter said…
Have a great trip.
This album cover is gorgeous.
I never got over "Hounds of Love"
11:12 AM

Stranger Ken said…
Enjoy your trip, but make sure you don't arrive looking like a terrorist or they'll arrest you for sure!
6:42 PM

annie mole said…
You are so lucky

Don't forget if you want to meet up.

A group of bloggers (mainly German and Belgian funnily enough) are meeting for a meal on the night you have your concert, but I would be free on another night (possibly not Thursday) if you wanted too meet for a bevvy.
2:57 AM

annie mole said…
D'Oh I got that wrong - your gig is on Monday - we're having the mini blog meet on Tuesday and you would be more than welcome to join us. We'll be meeting in central London for a meal and general chat and stuff!!!!
3:01 AM