Skip to main content
October 15, 2006
BITS AND BOBS: Kathy Griffin was hilarious. She covered a lot of territory: Star Jones, Clay Aiken (or Clay Gayken, as she calls him), Paula Abdul, Ryan Seacrest, Barbara Walters, Andy Dick, Mark Foley, Dubya and Co., Scientology, her own parents and much more. I haven't laughed so hard in I don't know when. Kathy doesn't do "jokes" in her stand up, but tells gossipy, bitchy stories about what goes on in Hollywood. If you're a news/entertainment junky like me, her show is catnip. My friend and co-worker Liz accompanied me and before the show we had dinner and went to the new open mic hosted by Dr. Madelyn Hatter at Aurora Coffee House in Little Five Points. Good crowd of folks for that, too.

I taped two new episodes of The Business of Words this afternoon. First up was award-winning poet, playwright and screenwriter Robert Earl Price (pictured). He was fantastic. His show will be available for podcasting on Oct. 23. Then I interviewed Stacie Boschma and Karen G. from Word Diversity/Art Amok. That one will be available on Nov. 6. My show continues to be one of the most popular downloads, with more than 60 people downloading my interview with Rupert Fike in just the last two weeks. Thanks for listening, everyone!

I'll be back in California in April 2007 for readings in San Franciso/San Jose and then down in the LA area for Poetry at the Loft in Redlands. I'm hoping to set up a number of events/signings while I'm on the West Coast. More details soon.

The Thrill and The Hurting anthology has been picked up by the great UK bookstore WH Smith and will be available from their website. That is so very cool.

Just found out that season two of The Bionic Woman will be out in the UK on Oct. 23...just in 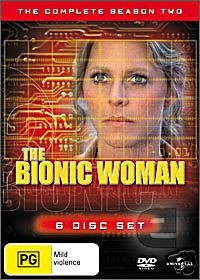 time for me to pick it up while I'm there. Season two was definitely the best one, with the Fembots (probably the best three episodes ever called "Kill Oscar"), Big Foot, Jaime battling her double who's hopped up on some drug that makes her bionic, Jaime singing in Nashville, space aliens, etc. Lindsay Wagner was so fantastic as Jaime Sommers. She often (okay, almost always) transcended the cheesy storylines to make Jaime human and realistic. Why these DVD sets haven't been released in the US is beyond me. I heard it was a conflict over the fact that the first two seasons aired on ABC and the final season on NBC, not to mention the crossover episodes with The Six Million Dollar Man, which have to be included for storyline continuity. For whatever reason, the UK and rest of the world hasn't had those issues. If you don't own a multi-region DVD player, you have no idea how many great shows and movies you're missing that are available in Europe and around the world.
Email Post

Anonymous said…
They don't sell multi region DVD players over here anymore as you don't need to. There are sites on the internet where you find the make of your DVD player and it gives you a code to put into your player that unlocks it so you can play all regions :). They actually tell you this in the stores now.

Americans need to catch onto this so they can play stuff from over here :).
5:34 PM

Collin Kelley said…
Sadly, our stores don't give out those codes, and many people still don't know how to operate there VCR much less program a DVD player. lol I've had my multi-region DVD player for many years...as my ever growing European DVD collection will attest.
6:50 PM

Montgomery Maxton said…
Kathy is funny. I want to be her main gay someday.
8:01 PM

Anne Haines said…
I had the WORST crush on Lindsay Wagner/Jaime Sommers (I was 14-16 when the series ran). I guess there weren't a lot of really *powerful* women on tv at that time, but she was, and that was just hot.
8:24 PM

Anonymous said…
You can get the codes on the internet so when your beloved multi region dvd player dies on day you will know you can still play all your multi region DVD's again :).
6:50 PM

Rupert said…
well, I did post that interview link to my list-serve of ex communards in Calif but it doesn't quite explain that many downloads so recently . . . unless Minus Five is stalking us :)
7:54 PM

I would LOVE to see Kathy Griffith live. Dean and I just die laughing watching her HBO specials.
3:32 PM

Collin Kelley said…
Actually, Peter, my eye got worse. I had to see an opthamologist this past Monday. I'll blog about it tonight or tomorrow. It's been a bummer.
4:08 PM