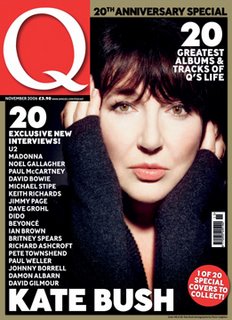 KATE ON THE COVER OF Q: My beloved Kate Bush is on the cover of the UK's Q Magazine to celebrate its 20th anniversary. She gives a funny little interview and says she's got some ideas for new projects, but no announcements when a new album might arrive. The new photo of Kate with the hat (again by Trevor Leighton) is loverly...she looks so fresh and happy. I cannot believe it's been almost a year since the release of Aerial, but I'll soon be back in the UK with all my friends celebrating the anniversary and the release of The Thrill and The Hurting. Kyla Fox and Jason Carty are moving full steam ahead with establishment of Morning Fog Press. The book is heading off to the printer this week now that an ISBN number has been secured. I'm also in the process of finalizing my readings (fingers crossed) in London for my trip over. More on that soon. 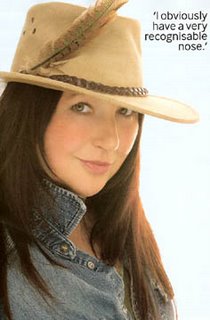 I was kinda in a malaise most of Saturday and Jackie, who is recovering from a twisted arm after falling down a flight of stairs, is the best kind of host...who knows when to chat then leave you alone to read, nap, etc. She's the best! The flight back from NYC was long and tedious. We sat on the tarmac at LaGuardia behind 24 other planes for 45 minutes before taking off. The conversations in the gate area were bizarre and offered more poetry material, including a group of sedate looking nurses talking about ripping off some street merchants of purses and coats (!?). Since most of that shit is fake, you have to wonder who really got ripped off.

I spent most of Sunday on the couch watching the first seven episodes of Lisa Kudrow's cancelled HBO comedy The Comeback. I thought it was hilarious and the second disk is on the way from Netflix now. Lisa Kudrow was the only reason I ever watched Friends and the only one of them who's actually funny and deserves a career. HBO was stupid to cancel this, yet churn out another season of the played out Sopranos.

Oh, and one other big thing...MetroMania Press and I are down to about the last 100 copies of Slow To Burn. MetroMania only did 300 copies, so the fact that we're in the final quantity just six months later is exciting. My publisher/editor Tanya said she got two more orders in the last week, so between that and my readings, I expect the last 100 will be gone by early next year. That means if you want one, the time is now. We probably won't do a reprint on these. A good bit of what's in Slow To Burn will be incorporated into the next collection, which recently got a new (but not final) working title. Still not sure what will happen with the next book. I'm sure I'll enter it a few times in the contest lottery and submit it to presses. I'm not above self-publishing again, although working with an indie or micro-press would be fun.

Speaking of micro-presses, have you checked out Reb Livingston's new No Tell Books site? Those books are hot, hot, hot. Reb has done an amazing job with this. Do yourself a favor (as I'm about to) and order a "subscription," which gets you all five titles currently available from the press (including work by Bruce Covey and Rebecca Loudon) for only $45! You can't beat that with a stick! Support the small presses, folks. They are doing some beautiful work and getting new voices heard.
Email Post

Unknown said…
I always liked Kudrow too -- she's the best actress of them all.

I've heard Rebecca Louden's book was excellent. I've been meaning to get it.
7:00 PM