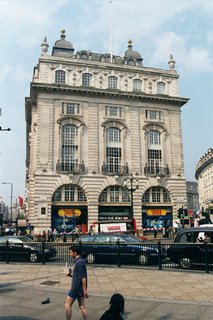 SO LONG, TOWER RECORDS: While I love downloading music from iTunes (and used to steal it regularly from Napster and Limewire), I have never stopped buying CDs. I have well over 500 in my collection and browsing record stores was (and still is) one of my favorite pastimes. The announcement that Tower Records will close is very, very sad. I literally spent thousands of dollars at the Tower here in Atlanta and in London during the 90s. I have the credit card debt to prove it.

The local Tower was always reliable for getting in European singles and albums, and kept vinyl in stock when everyone else was phasing it out. I remember my first trip to Tower Records in Atlanta in 1988. I went their with my friend Jenny and finally found the cassette (remember those?!) of This Mortal Coil's Filigree & Shadow, which another friend, Kathy, had introduced me to months and months before. One of my ex-boyfriends and I used to make Tower a regular stop on the weekends, and I would always buy something. I remember being in the store and hearing Jane Siberry for the first time, the song Temple coming over the speakers from her When I Was A Boy album. I left the store with CD in hand. Tower always had something interesting playing on the speakers and the staff, at least here in Atlanta, had good taste. Tower also kept me supplied in copies of HomeGround, which was only one of two stores in the city that stocked it regularly.

On my first trip to London, the first place I went was the giant Tower at 1 Piccadilly Circus (pictured above). I remember exactly what I bought: Bjork's Post album, which was released the day I arrived. There were giant posters of her all over the city. Whenever I listen to the album now, I always think of London and Tower. My other vivid memory of the Tower in London is going straight there after arriving in the city. I dropped off my bags at the hotel and then had a taxi take me. This was 1997 when I went with my friends Joy, her now ex-husband David, and Peter. I had two shopping baskets loaded down with CDs and the bill came up to over 300 pounds (that's about $700 at today's exchange rate). I had to buy an extra bag to get them all back home.

I have always been, and will always be, a music freak. From loving Judy Collins, Joni Mitchell and Fleetwood Mac in the 70s, to discovering Kate Bush and the Cocteau Twins in the 80s, I keep an open mind about music. Hell, I even like some country. Willie Nelson, Emmylou Harris, Patty Griffin, Patsy Cline, Loretta Lynn...try it on me. And I do like rap and hip hop, esp. old school stuff (Sugar Hill Gang, Run-DMC, Salt 'n Pepa, LL Cool J) and some of the new...Missy Elliott, The Fugees, Kanye West, OutKast, etc. Tower Records helped me discover all the music I love. Sure, there's still the massive Virgin Megastore in London, but it's not quite the same. I'll never have the sensation again of coming out of the Underground and turning back to look across Piccadilly Circus and see those red and gold signs in the window beckoning me toward all the wonder located inside.
Email Post

Montgomery Maxton said…
Dude...I saw Alanis under cover in the NYC Virgin Megastore once. Considering I am her stalker, I nearly created a riot of one.
1:39 AM

Collin Kelley said…
I don't think I ever met anyone famous at Tower. I've met famous people elsewhere, but never out shopping. I did see Elton John and his husband at a movie theater in Atlanta. They had just come out of "The People vs. Larry Flynt." I walked by Jean Paul Gaultier at Harrod's once.
2:27 PM

Unknown said…
Sad that they are closing.

I like all types of music too. Elton John is one of my favs -- saw a documentary on him and Bernie Taupin on VH1 recently -- really awesome. I love old Madonna, not that crazy about her stuff after the Ray of Light album. And Simon and Garfunkle. But I also like Johnny Cash and Snoop Dog, 666 mafia and George Jones.
11:31 PM

Montgomery Maxton said…
I've seen Larry Flint many of times in my home turf of Cincinnati; been to his shop many of times, too. I bought a t-shirt from his Hustler Superstore in Monroe, Ohio once that said, without the *, F* You You F*in F* and I wore it to a club and guys put their hands down my pants all night. God Bless Larry Flint.
12:12 AM

I have to check out some of the music of Kate Bush. I thought the photo with the cowboy hat was quite stylish; I have a thing for cowboy hats.

Thanks for the link, Collin :-)

Anonymous said…
I keep hearing rumors that Virgin might be opening in Atlanta, or that at least they're lookin around. Maybe Atlantic Station, or the new "Midtown Mile" district on Peachtree.

I remember when I was living those four years in exile in the wilderness (Orlando) that was one bright spot there -- the big mega Virgin store at Downtown Disney.
5:49 AM