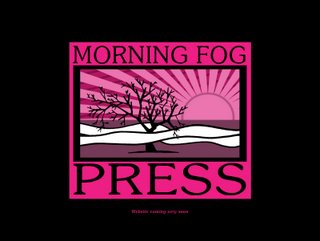 TGIF: It's been a busy, hectic week trying to wrap up stuff at the day job before I depart for the UK next week. Last night I sat on a media panel, talking with students and others who are thinking about careers in journalism. When it was over, I dashed to The Seen Gallery in Decatur for my final Atlanta reading for Slow To Burn. I was half an hour late, it was pouring down rain and I wound up reading to four people (one of whom bought a book...thank you, sir). The Seen is a great space and I talked with the owner and he wants to have me back again in December with, hopefully, a bigger audience.

We will have a launch party for The Thrill and The Hurting: Poems and Art Inspired by Kate Bush anthology on Saturday, Nov. 4, at the Grey's Inn Pub in London. That's the Morning Fog Press logo (created by Jason Carty) above. I've been talking to MFP's publisher and editor Kyla Clay-Fox about future books. We have some lovely ideas. More on this soon. Check out the nifty new MySpace page for Morning Fog Press. You can order the book (via secure PayPal) and see info on the contributors.

Speaking of MySpace, I've created a new one at www.myspace.com/collinkelleypoetry where you can hear me reading "Sometimes Her Arms Bend Back" from the A Slice of Cherry Pie anthology. More audio poems from Slow To Burn will be added soon. Maintaining two MySpace sites (the other is www.myspace.com/collinkelley) is too much trouble so the latter one will probably disappear in the coming weeks and I'll migrate to the new one.

Cleo Creech is interviewed in the new edition of White Crane Journal about the Outside the Green Zone chapbook. They also published one of his new poems. The chapbook continues to draw interest the slaughter of gays and lesbians in Iraq and those who have exiled themselves to escape death.

The brilliant Sonya Renee is in Atlanta to perform at tomorrow night's Art Amok event at 7 Stages theatre and at Java Monkey Speaks on Sunday night. I had the pleasure of performing with her at this year's Austin International Poetry Festival and watching her win the festival slam. You don't want to miss her!

A couple of posts ago, I blogged about my eye infection. I thought it was clearing up, but I was wrong. It's nearly two weeks later and I still have it. This past Monday, I went to an opthamologist at the Emory Eye Center who diagnosed it as chalazia, which is basically an inverted stye on the inside of my lower eyelid. I've been putting hot compresses on it and using an antibiotic ointment. Today is the first day I've noticed any improvement. I sure as hell don't want to go to England with this, but the other treatment would be to cut it open. With my fair complexion, the doctor said it would cause a lot of swelling and bruising. I have fingers, toes and legs crossed that by the time I board the plane at the end of next week the eye infection will be a bad memory.
Email Post

Tania Rochelle said…
I get those eye-things every couple of years. They really suck, and they take forever to go away--especially when you poke them with safety pins and then dab them with peroxide on a Q-tip.
3:11 PM

Anonymous said…
Hope your eye gets better soon as we don't want you bringing any infections over to England *grin*.
8:26 AM