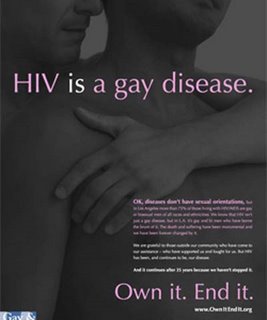 TURNING BACK THE CLOCK: The Los Angeles Gay & Lesbian Center has created a campaign with the slogan HIV is gay disease. The poster and television campaign is one of the worst things I've ever seen, and the fact that it came from a gay and lesbian organization is sickening. After spending nearly 25 years telling the world that anyone can get HIV/AIDS, this campaign comes along and turns back the clock to the Reagan era. The LAGLC says that more than 75 percent of HIV cases in LA are gay men, so it's targeting clubs, bookstores and gay areas hoping to convince men to "own it and end it."

What the LAGLC is ignoring in its targeted campaign is the fact that HIV in women is increasing at an alarming rate, while the African American and Hispanic populations continue to see increases. What kind of message does this campaign send to everyone else? "Oh, I'm not a gay man, so I'll never get HIV!" What a dangerous and irresponsible message to send to children, not to mention returning the stigma that HIV is a "gay disease," which it most certainly is not. This kind of high profile campaign is the kind of thing that triggers more homophobia and dilutes the message of other organizations (including the CDC, which has called for all adults to be tested for HIV) that HIV/AIDS is on the increase across the entire population, not just gay men.

I get what the LAGLC is trying to do. There is a new apathy in the gay community about HIV/AIDS. There's a new attitude among gay men along the lines of "if you get it, you get it" and they'll just take the drug cocktails and everything will be fine, which means unprotected "bareback" sex is back in vogue, especially with young gay men. There's also black men who are on the "down low," who have unprotected sex with men, but swear they aren't gay, then go home and have sex with their wives or girlfriends. The HIV/AIDS crisis has taken a backseat in America as we deal with terrorism, the economy, our corrupt/warmongering administration, etc. You can bet the crazy Christian right will use this campaign as ammunition for their message of hate and bigotry.

I understand that the LAGLC is trying to stir things up and make gay men pay attention, but this is the wrong way. It's misleading, misguided and just plain wrong.
Email Post

Anonymous said…
The crazy lesbian who runs the center out here should be fired. I saw her on CNN talking about how it breaks her heart that so many gay men are getting infected, but she never mentioned the increase in women.

Collin Kelley said…
The whole lot who came up with this and approved it should be fired. There seems to be little support for the campaign.
10:53 PM

Friend of T said…
WOW, that's extra disgusting~especially to all of those of us from the old DC Act-Up Days....I could cut a ho'!
~kg
3:48 PM