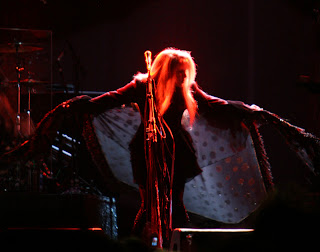 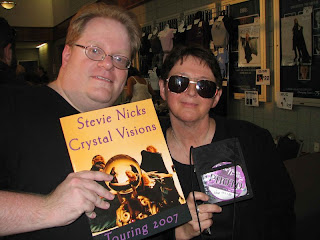 BACK FROM OLD VIRGINIE: Here's a bit of the photographic evidence of my trip up to Portsmouth/Norfolk to see Stevie Nicks with my friend Donna. I was able to use my blogger/journalist cred to get a photo pass, which Donna is holding in the photo above, for her son Chris Downing to get some professional shots of Stevie in action. The folks at the Constant Center, a beautiful arena in Norfolk, were very helpful, particularly Mark Fine and Dee Larion who sorted out the pass in less than 24 hours. I have a disk full of Chris' photos from the show, and I will post more tomorrow along with a review. Stevie looked amazing (check out the sneak peak photo above), sounded amazing and put on a rocking concert.
Besides Stevie, we basically did nothing. Donna lives in a lovely 100-year-old home in Portsmouth's Old Towne district. We had a Cagney & Lacey marathon, went out to eat at San Antonio Sam's, a great little restaurant in Norfolk, and to see the new film Evening starring Toni Collette, Vanessa Redgrave, Claire Danes, Meryl Streep, Natasha Richardson and every other great actress working today. The screenplay was adapted by Michael Cunningham from Susan Minot's novel, but I hate to say I didn't love it. The performances -- esp. Collette, Redgrave and Streep -- were stellar, but the plot was Lifetime movie of the week hoo-ha. We saw the movie at the historic Naro Cinema, which plays foreign, indies and revivals. It was such a cool place.
Donna and Chris were also able to drag me out to the Ambush, a gay bar in Virginia Beach that had one of the most mixed clienteles I've ever seen at a 'mo bar. Gay, lesbian, straight and some kick ass drag queens performing, including Chris who was fierece as his alter-ego Miss Sydney Devereaux. Good music, too. One thing I noticed is that all the little gay boys look the same now. Same hair cut (that spikey short messy look), wear the same clothes (tight t-shirt and some kind of shorts) and boxers seem to be back in. Don't ask me how I know that.
I was also able to talk to the wonderful Krys Fitzgerald-Morris, editor of Homeground in the UK, via Skype as she wrapped up issue 78. I have an essay about John Carder Bush and some new poems appearing in this issue. It's going to be fabbity. Many thanks to Krys to for all her hard work.
I'm off to the MondoHomo reading. More on that and Stevie tomorrow.
Email Post

Anonymous said…
Sounds like you had a good time seeing Stevie N.

Hmmmm...scoping out the boys I see. Don't make me jealous.

Anonymous said…
"...One thing I noticed is that all the little gay boys look the same now. Same hair cut (that spikey short messy look), wear the same clothes (tight t-shirt and..."

And have you noticed how all the little straight boys are going for that metrosexual look? How are we old dudes (straight and gay) going to tell them apart? ;-)
10:46 PM