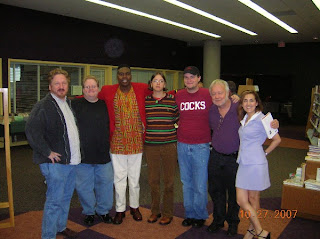 Cleo Creech, Me, Reginald Jackson, Megan Volpert, Dustin Brookshire, Franklin Abbott & Lisa Allender
BIG GAY POETRY WEEKEND: Okay, not completely gay, but close enough. On Friday night I had the pleasure of sharing the stage with Jim Grimsley, Sharon Sanders, Franklin Abbott, Theresa Davis and Karen G. at the GLBTQ Lit Fest at the Atlanta Library. I introduced Theresa and Karen and read Why I Want To Be Pam Grier. Jim read beautifully from his second novel, Dream Boy, and Theresa got the audience pumped up with one of her signature pieces, Rock Star Poet. We also watched the award-winning documentary The Celestial Brides, about the transgendered community in India. Filmmaker Parthiban Shanmugam was on hand to introduce the documentary.

Yesterday morning I had to get up early (one of my least favorite things to do in the world, esp. on a Saturday) and go back over to the library for a reading. We had about 25 people there, which was surprising for a morning reading. I decided to test out some of the new Memphis poems and a few pieces from Wake. Cleo Creech gave one of his best readings as did Reginald Jackson. Great stuff, guys. That's us after the reading in the picture above (courtesy of Dustin...many thanks).
There were to be more readings in the afternoon, but I had to head over to Wordsmiths Books in Decatur to host the first Poetry Atlanta Presents... You never know what kind of turnout you're going to get at a poetry reading, and I was worried that our first PAP... might be a bust. Just before the starting time at 2 p.m., most of the seats were filled. The treat was getting to hear new work by our three features Travis Denton, Tania Rochelle and Thomas Lux. As a matter of fact, Tom's whole set was a selection of poems from his forthcoming collection due out in 2008. The reading lasted an hour, which was perfect. I think the audience was satisfied and wanting more. With the first PAP... a success, we'll be planning the next one for early 2008. And the surprise guest was none other than blogger Kick Me Jennifer, who graciously rescheduled her hair appointment just so she could come and heckle Tania. KMJ is funny, a bit crazy and totally inappropriate, which is why I like her.

I've still got a ton of shit to do before I leave for London. More soon.
Email Post

my Dad enjoyed the reading at Library Saturday morning(My Mom was present as well, and of course, she's heard several of our pieces--she was really impressed with Cleo & Reginald, who she had never before heard !)
My pal,Danny M. got a bit of the reading on film(first few readers),too.
Thanks Coll, for all you do to promote poetry, and to keep us up-to-date!
12:00 AM

Tania Rochelle said…
Yes, Collin, thanks for that. And for being such a great host on Saturday.

You handled Jennifer really well.
5:28 AM

Collin Kelley said…
Tania you were fab as always. A good selection of poems and I could hear the audience "murmur" of appreciation while you were reading. To me, that's always a sign of a connecting with the listeners and a good reading.

Anonymous said…
On our quick trip to Santa Fe we had the pleasure of sharing our delicious B&B breakfast with a couple from Atlanta - and it just so happens the woman knows this "Karen G." you mention above! What are the odds? She is a professor at Oglethorpe - but she did not give me her name. Itty Bitty world!
11:28 AM