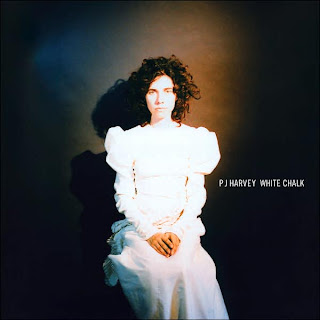 PJ HARVEY & BIONIC WOMAN...AGAIN: Purchased PJ Harvey's new album White Chalk yesterday. Definitely one of the best albums of 2007. Although I had heard several of the songs on YouTube, I wasn't expecting an entire album of melancholy, piano-driven ballads. PJ has an amazing voice, one built for rock and roll, but she sings every song on White Chalk in a high, pure upper register I didn't even know she possessed, much less could sustain over an album. The songs are delicate and mournful, especially "When Under Ether" and the title track, which surely ranks as one of her finest songwriting moments. The critics are split over this unexpected album, especially on the heels of the shouty Uh-Huh Her from a few years back. White Chalk is more in line with Is This Desire? and Dance Hall At Louse Point -- my two favorite PJ albums. This album also reminded me of Kate Bush and Diamanda Galas. Check it for yourself. I have a few things to say about Annie Lennox's new album, too, but I'm still digesting it.

So, I watched the second episode of the new Bionic Woman last night. Much to my surprise, I enjoyed it. That's not a ringing endorsement, however. Jaime went on her first mission to a small Idaho town that had its population wiped out by a virus unleashed by some kind of terrorist group, or maybe it was our own Army. The writing and direction was so poor it was hard to tell. They resolved the issue in like 20 minutes, and Jaime hardly used any of her bionic powers. Jaime finally showed some spunk, but some of the dialogue was cringe-inducing. I mean, it made the old 70s version seem like Shakespeare. Lindsay Wagner, to her credit, knew how to sell any camp line like it was gospel. There was a glimmer of hope last night and this new Bionic Woman might improve if they get Jaime out on more missions. Katee Sackhoff had one scene (boo-hiss!), but it appears she and Jaime join forces next week to battle some army looking people. Who knows. I wish they would hire me to write a few episodes. I'd have some souped up, crazy Fembots all over the place. NBC...are you listening?
Email Post

Anonymous the Younger said…
Yay! Idaho on the TVs! Did they show just how beautiful this state really is?

I'm afraid Idaho was depicted as a terrorist training outpost full of dead civilians. Not something to use in travel brochures I guess. ;)

Charles said…
Did you notice the episode was directed by... Tim Matheson! LOL.

Collin Kelley said…
I guess he hasn't been doing much since West Wing went off the air. I still blame the writers. It was a confusing episode.
3:18 PM

Unknown said…
I love PJ Harvey. Thanks for this! I've been living in a cave and didn't know about her latest album.