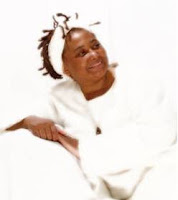 WEEKEND UPDATE: A very quiet weekend at Casa de Collin. The release of the CRUX anthology was wonderful and moving. A bit about how the anthology came about: poet and activist Alice Lovelace (pictured) was a fellow at the Caversham Center in South Africa two years ago. Upon her return, she was required to write a report detailing her experiences to the Fulton County Arts Council, which co-funded the fellowship. Instead of a report, Alice asked if she could write a book. Her "report" became the foreword to the anthology, which compares South Africa with the southern USA. AIDS, apartheid, loss of history, looking for ancestors, the 1906 Race Riots in Atlanta -- all this and more found its way into the anthology. The work by Theresa Davis, Robert Earl Price, Karen G., Jessica Care Moore and Alice herself is beautiful. It's truly an honor to have a poem among all these wonderful words. I'll have a scan of the cover up in the next day or so. The book will be available locally at Shrine of the Black Madonna bookstore and others soon and, hopefully, online.

I worked on revisions of several older poems to submit to the Burnside Review, which is publishing a special issue about Los Angeles in 2008. If you're from the City of Angels or have poems that feature the city, visit the journal's website for submission guidelines. They let you email them in. Hooray!
Found out that while I'm in London, David Tennant and Freema Agyeman from Doctor Who are going to be signing copies of the Series 3 DVD set at HMV on Oxford Street. My inner geek is squealing like a little girl...not to mention I have a bit of a crush on Mr. Tennant. I'll try to behave and get a photo. I plan to do some blogging while I'm in the UK, but the nine days I'm there are filling up rapidly with people to see and things to do, so I'll see how it goes.
Email Post

Anonymous said…
So which LA poems are you sending? Inquiring minds want to know.