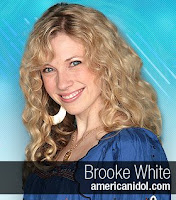 Forget the Top 5, forget that the finale is only a few weeks away, forget the classic songs of Neil Diamond...the real story last night on American Idol was Paula Abdul becoming so incoherent (for her) and flustered that she revealed some of the show's secrets. I'm sure some viewers were unaware that parts of the live show are pre-taped during dress rehearsals. The conspiracy theorists have been out in force since Paula critiqued both of Janice Muppet Jason's songs after he'd only performed once. Obviously, the judges began their appraisals of the Top 5 during rehearsal and took notes. With each contestant performing two songs, plus all the video clip packages and commercials, the show was rushed and "chaotic," according to Simon.
No one bought Paula's excuse that she had mixed up her notes on Jason and David Cook after she shrieked, "I thought you sang twice." Poor, Miss P. She played it off to the media today saying it was "the fun of being on live TV." Uh-huh. The terror in her eyes when the Vicodin clouds momentarily parted and she realized her gaffe last night was about as far away from fun as you could get. The only mention of Paula's meltdown was a terse statement from Gaycrest about the judges being "thrown a curve ball" last night and that terrible things were said about Paula on the Internet. "She's a member of our family and we love her," Miss Ryan said earnestly to camera. And that was it.

The opening group sing was possibly the worst ever. A medley of Neil Diamond hits including Cracklin' Rosie and Song Sung Blue. It was full of messy transitions, poor vocals and some of the lamest choreography ever. They all looked incredibly uncomfortable. Jason, Little David and Big David were sent to safety and Syesha and Brooke immediately named the bottom two, then it was half an hour of Natasha Bedingfield shouting her new single (and hugging and kissing Little David until he turned into Tickle Me Elmo...wow, two Muppets!), Neil Diamond singing a song from his new album (no one cares, baby, sing the classics!), pimping So You Think You Can Dance, the first girl Simon ever kissed calling the show...blah, blah, blah.

In the end, Brooke was given her walking papers after weeks of false starts, trembly voiced performances, bad song choices and worse fashion statements. I liked Brooke. I still think she was the most humble and honest performer on the show, but she just couldn't overcome her nerves. She was an absolute wreck after getting the news and didn't want to sing, but they made her do it anyway. She finally just said thanks and walked toward the back of the stage sobbing. What was more interesting was right after Ryan said she was going home, the camera cut to the couch and while everyone else showed concern, Elmo rose slowly with a cold gleam in his squinty eye. David vs. David in the final. Take it to the bank, kids.
Email Post
Labels: American Idol Season 7 Brooke White Neil Diamond Paula Abdul Top 5

Lisa Nanette Allender said…
"Tickle Me Elmo". Brilliant, Coll, as usual. You are soooo funny!
Thanks for the much-needed smiles!
I loved Brooke--- I thought she was "the real deal".
And yeah--what IS up with Paula?(or as you call her, "Miss Pills")
12:58 AM

Pris said…
Hi Collin
I've only seen youtube highlights of this show, but if these are pre rehearsed and partially prejudged before the show what's with the tears and looks of awed surprise at showtime. They ought to get Oscars for their acting lol
7:28 AM

Anonymous said…
AI is total fucking sham. I'm convinced now after Ryan glossed over the thing with Paula. They should have explained what happend truthfully instead of sending Ryan out to bash viewers, bloggers and media for starting rumors about Paula being drugged up. She's been drugged up for two seasons. What a bunch of assholes.