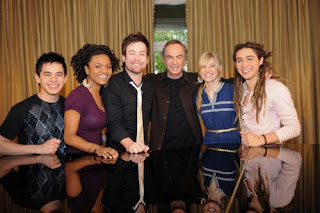 Simon Cowell said the packed hour long episode of American Idol -- with the kids singing the Neil Diamond songbook -- had been strange and chaotic. That's one way to put it. Paula was over-medicated again and with the Top 5 singing two songs, the show felt rushed and cluttered. As in previous seasons, when they do this two song bit, one is usually stronger than the other, which was mostly the case tonight. I have to say the strategic use of God and fervent patriotism to appeal to the Fox Network kool-aid drinkers is getting really old. But, hey, if it works, it works. At least no one sang Heartlight.

Jason Castro: Despite being clueless about Neil Diamond (did Doobie J grow up in a polygamist cult with no contact with the outside world? I mean even 20-somethings know Andrew Lloyd Webber and Neil Diamond), our pretty, pretty lady looked clear-eyed and sounded folksy and on pitch while singing Forever In Blue Jeans. Then he did September Morn. Ugh! From the cruise ship arrangement to his flat reading of the song, it was a disaster from start to finish. He mumbled something about choking on his vomit at the beginning or something, but the judges savaged him for both songs. Even incoherent Miss Pills said he was too safe. All you Jasonloonies better get to dialing.

David Cook: Neil said David was smart to pick two of his lesser known songs, I'm Alive and All I Really Need Is You. On I'm Alive, David picked up the guitar again, made it frat-rockish, found that Neil Diamond rasp and sounded decent. I could actually hear this song on the radio today. I'd change the channel, of course, but I could hear it. On All I Really Need...he did the same frat rock arrangement. It was okay, I guess, but he's just so "samey" with all the songs now. Paula said she already saw him as the winner, but she also sees pink elephants flying around her house, so it's hard to take her seriously.

Brooke White: Neil was "pleasantly surprised" that woman on the verge of a nervous breakdown Brooke was able to pull off two of his biggest hits: I'm A Believer and I Am, I Said. Maybe she pulled it off with Neil in rehearsal, but her voice sounded weak and trembly on I'm A Believer, plus she was smiling like an idiot and was totally rocking the Juice Newton K-mart Collection with that outfit. However, she got back behind the piano and did an excellent version of I Am, I Said. One of her best performances in weeks. I was happy for her.

David Archlueta: Hearing the puppy sing Sweet Caroline was weird. It was probably the most upbeat song he's done all season, but trying to picture him with a girl (or guy) is impossible. Sweet Caroline might as well have been the name of his teddy bear or a house plant it was so devoid of any charisma. For his second song, he did America, which is a staple of Fourth of July firework displays from sea to shining sea. Simon called it a smart choice -- meaning it plays well to the ultra-patriots -- but I thought it sucked. He took the rock edge off the song, changed the melody and was obviously afraid to sing the last big "today," changing the words to "let freedom ring." What? I'd stick him in the bottom two for that alone. But like all the robotic arm waivers in the audience, all the robotic tweens will be dialing until mommy makes them go to bed.

Syesha Mercado: Somebody found a bottle of relaxer, because I didn't recognize those long silky tresses on our Whitney-wannabe. She started with Hello Again. It was pleasant, but boring as hell, and trying to power note the end was a big mistake. Then she tried to recapture her Andrew Lloyd Webber glory by singing Thank the Lord for the Nighttime. It's very Broadway-ish and she was dancing around barefoot, but it felt a little soulless. Maybe name-checking Jesus will help boost the votes. Simon said he thought she might be in trouble tomorrow night, but that's the reverse kiss of death, meaning she'll be around another week.

It's tough to predict the bottom two at this point, but I'll go with Syesha and Brooke for shits and giggles, but Jason really ought to be there, too.

minus five said…
can you believe i haven't watched idol one time this season?
10:55 PM

"And no one heard at all, not even the chair." The worst lyric ever. But Brooke made it sound good. I thought it was great that she sang "Arizona" instead of "New York City"--I think it got her more connected to the song.

I thought Syesha's voice was beautiful tonight on her first song.

David A's America-loving heterosexuality farce is wearing way thin. I liked him at the beginning when he was singing from his heart. Now he's singing with the prize in his eyes.
11:51 PM

Anonymous said…
The Juice Newton Kmart Collection!!!!!!!!!!!!!!!! That is the best. I really hate David A now. I couldn't stop looking at his teeth tonight. They looked enormous. I did notice also that Jason has a great ass but he still looks like a ladyboy and he totally screwed up those songs.

Anonymous said…
This show is rigged and fake and Paula Abdul proved it by giving remarks about both of Jason's songs before he even sang the second one. That means she was either taking notes during rehearsal or the producers had given her cards telling her what to say. Either way it just proves this show is the biggest fake in history even worse than those fake quiz shows of the 50's. Turn off this show and find something else to do. America is being duped.
9:37 AM

at least brooke didn't have to reboot this time.

as to the poster above who says that the show is rigged because paula gave remarks out of turn, just blame it on the fact she didn't take her xanax.
11:15 AM

Collin Kelley said…
I think it's pretty obvious that the judges had been watching the dress rehearsal and Paula had already made some notes. The pills kicked in and she got flustered. According to Entertainment Weekly, who had a reporter in the theater, the producers were freaking out.
1:14 PM

ButtonHole said…
I, too, was all over the absolutely brilliant "Juice Newton Kmart Collection."