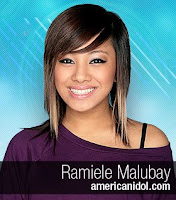 Her voice went "bye-bye" a few weeks ago, and now the munchkin herself is packing her bags. After weeks of uninspired, robotic performances, Ramiele Malubay was finally voted off American Idol. Unlike other cast offs, I don't picture her having a career. Sadly, I see her serving iced tea and pancakes to the brunch crowd. I know, I know...I'm mean, but seriously, girl was not good.

Syesha Mercado must have been breathing a big sigh of relief after she escaped the bottom three. The other two were Kristy Lee Cook (as expected) and Brooke White, which wasn't a huge surprise either. After watching her clip again, Brooke just didn't connect -- or quite get the seriousness -- of Dolly Parton's Jolene. You don't smile while begging another woman to not take your man. Kristy Lee knew she was headed to the bottom three (she even had a little sign made up), and should know her stay on Idol is now on deathwatch. She'll be gone next week (or maybe not if Idol pulls the same stunt and doesn't vote off anyone during Idol Gives Back) unless someone really, really mangles their song.

As usual, there was an hour of filler before finding out Rama-lama-ding-dong was booted. The 9 to 5 group sing was humiliating for the whole cast, as they lamely tried to two-step. Jason Castro looked like a giant doofus, flailing around the stage and sounding nasally. David Cook was probably wishing his high blood pressure scare had kept him in the hospital overnight. Even worse was the Ford commercial where the Top 9 had to sing It's Tricky by Run-DMC. Another classic butchered and left for dead. Enjoy those royalties Rev. Run. The Clark Brothers (who?) performed a frenetic version of This Little Light of Mine with dueling string instruments.

Dolly Parton performed, looking fabulous, but sounding a bit rough (sorry, Dustin) on her new song, Jesus and Gravity. Like I said, I'm a Dolly fan, so I can't hate on her. Gaycrest got a zinger in after Dolly said, "I've got Jesusu, and you've got Simon," to which Miss Ryan replied: "I got the short end of the stick." Ha!

Next week is Idol Gives Back, which will be two hours of performances by Annie Lennox, Mariah Carey and a bunch of other superstars. Will someone go home or will the producers cut two at once the next week?
Email Post
Labels: American Idol Season 7 Ramiele Malubay

i wish dolly would stop wearing those pants that have a half cape hanging down the back.
11:47 PM

Kate Evans said…
and dear gawd, all these jeezus songs... I want some devil, wicca, & hard-core budhha songs next time.
12:21 AM

Lisa Nanette Allender said…
I only got to catch the last part of the show TGFCR(Thank God For Collin's Reviews).
WHAT THE HECK IS UP WITH THAT OUTFIT DOLLY WORE?
I agree that the capri pants with the midi-cape has to go!
But Dolly looked pretty, even if a bit "thin" in voice.
6:15 AM

Anonymous said…
That outfit was trademark Dolly-wear. She's been wearing tight outfits and capes since the 70s. She did sound a bit off with the song. Maybe she had a cold. She's still cute as a button.

Dustin Brookshire said…
CK-- Well, I don't if it is rough as much as sounding her age. She's got the Loretta Lynn granny singing voice going on.