Where Poems Come From 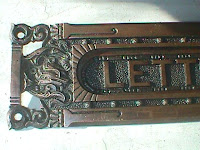 We've had a rash of car break-ins again at my apartment complex. The two buildings here are wrapped around interior parking decks and despite the gated entry, video cameras and security patrol, we've been averaging one break-in a week now for the last month. A notice from management was slipped under tenants' doors last night. It said the security patrol heard the sound of breaking glass at 4:50 a.m. and got a glimpse of the person. And then this:
The police tell us the suspect in this morning's break-in is a known petty thief, described as a black male in his forties, short in stature (about 5'6-5'8), who goes by the name Pee Wee. Call 911 if you see a person matching this description, don't worry about mistaken identity. It's better to err on the side of caution.
Something about that just rubs me the wrong way. So, they are basically saying that any black man who looks short walking down the street in the vicinity should have the police called on them. Really? Seriously? It's not like the guy is committing murder; he's either homeless or a drug addict. We've been warned here over and over and over not to leave anything valuable in our cars overnight, but people still leave laptops, briefcases, GPS systems, etc. on their seats. Sure, we should be able to live without someone breaking into our cars and stealing our stuff, but that's not the real world. I'm pretty sure it was Pee Wee who broke into my car last year, although what he was looking for in my piece of shit ride is a mystery. There was nothing of value in there, unless he wanted some old cassette singles from Taylor Dayne and C&C Music Factory.
I just couldn't believe they actually put that language in the notice sent to all the residents. I'm calling the office today to talk to the woman I know who works there. This is the same kind of language we got from the cops last year when we had our first Neighborhood Watch meeting. This little white cop (a Pee Wee himself) with a big chip on his shoulder and too much power asked if we had ever noticed that all the black guys who live and hang out along Boulevard (a big street that runs through the city) all wear baggy jeans and white tank tops. Then he said that's so when they are being chased by the cops they all blend in and you can't tell one from the other. We were all stunned into silence and there was so much tension in the room you could cut it with a knife. We haven't had a Neighborhood Watch meeting since.
Also, for whatever reason, my junk mail folder last night was flooded with about 20 of the same pieces of mail saying I had won the British Lottery. This is just cruel. I think someone out there knows how much I want to live in London and put me on some spam list. I'm sure most people with an email address have gotten a letter from the British/UK lottery. They want to you deposit some money in an account for "transfer and conversion fees" of the UK pounds into dollars, then you never hear from them again. Or they want access to your bank account so they can direct deposit your winnings. You wake up expecting $2 million and find out you have a zero balance.
All of the UK lottery notices usually have the same address -- 28 Tanfield Road in Croydon, south London. I decided to Google map the address and sure enough, there is a Tanfield Road in Croydon. Using the satellite imagery, it appears to be on a street of old council flats and building being converted into offices. Certainly not the place where the British Lottery, if there actually was such a thing, would be located. I imagined turning up there in the fall with my hand out asking for my cash so I could go purchase my palatial London home.
I started writing.
Email Post
Labels: British Lottery car break-in inspiration Poetry racial profiling racism

realitywrites said…
good for you to write your apartment office personnel about their blatantly bigoted language! even if it doesn't get anywhere, she at least will know what an a-hole she is, or that there are consequences for ignorant behavior. or maybe put out a mock memo where the suspect is actually a person matching her/the landlord's/security person's description to a T. hey, there's an idea for a poem...or I guess that's where you're headed with this anyway :)
11:42 AM

minus five said…
wow. i'd like to think the office is just bad with their words. either that or they like to beg for lawsuits.

i won the british lottery too. a couple of times at least. i'll split it with you.
12:51 PM

Anonymous said…
C&C Music Factory? I cant believe you admitted to that. Good luck with the new poems.

Lisa Nanette Allender said…
Sorry about the bigoted folks writing memos. It's utter nonesense whether someone is white or black committing a crime.
Hope whoever is so desperate that they feel the need to rob, gets help!
And that UK Lottery---oh, if only it were so!
6:34 PM

Anonymous said…
I've had my car broken into three times since January at the state employee parking decks by GSU. Each pop cost several hundred dollars. The first time, someone stole my Christmas gift--a radio with CD player, which I was using to listen to books on CD. The second time, the person stole the replacement I got for my birthday. The third time, despite a newly-installed alarm, the person popped my trunk and stole a bag I got in NYC that contained ABSOLUTELY NOTHING of value to anyone but me--receipts, personal journal, journal for a class, family photos.

GSU is a crime magnet because of all the ostentatious consumerism--every kid has an iPod, a laptop, a cell phone, and a wallet full of credit cards, and many leave these things lying around or are victimized while they sleep in public (uh, I thought that was illegal). I used to help out anyone who asked, but there are so many pure thieves hanging out and blending in with the real homeless guys that I can't give anybody anything anymore. Besides, I never carry cash. I carry what I need to park and to buy a Coke.

There are so many agencies serving the homeless, all within a block or two radius of GSU, that I don't put up with being hustled anymore. This ATM is tapped out and overdrawn.

You should hear La R. on this subject. She has a completely different perspective: that these are big able-bodied guys who can go out and find work of some kind.

Someone who is genuinely in need I will help. I have done it all my life. But I am a lot more careful about who I help these days.
11:16 PM

Collin Kelley said…
Robin, I agree that you can't help everyone. It's just impossible. And I also agree with La R. that many of the men on the street could find some work if they wanted to, but they are either chemically dependent or they just don't want to work. Everyone has a different story, I'm sure.

What freaked me out most about the situation here was the language on that flyer. It's racial profiling. This area of east Downtown is transitional and so there are many young professionals -- of every age and race -- living here. So the police are saying if you see a short looking black guy, call the police. That is just wrong.
11:54 AM

Anonymous said…
It was poorly worded. That's for sure. What did apt. management say?
9:56 PM