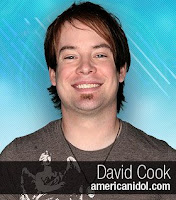 I knew the two hour season finale of AI was going to be tedious, and this was proven right off the bat by the Top 12 singing yet another moldy oldy -- Get Ready -- while the past contestants of So You Think You Can Dance writhed around them. It was a frenzy of long camera angles, uninspired singing and since everyone was wearing white, it was hard to tell who was who...maybe that was by design. Then they cut to commercial and there was hatchet-faced former "supermodel" Janice Dickinson blowing kisses. Ugh!

The two Davids -- Archuleta and Cook -- sang Hero by Chad Krueger...okay Cookie Combforward sang it and Tickle Me Archuleta was the back up singer. Big D sang the shit out of this song, unlike his less than stellar performances last night when it actually mattered. Then there was the pimping of Mike Myer's new movie, The Love Guru, which had the Davids going to visit Pitka's ashram for advice. The funniest bit was Myers telling Cookie to shave off the stubble, that it was Melrose Place circa 1990. There was also some eye-rolling lines about Fetus growing hair on his naughty places that was a little inappropriate. After this nonsense, Syesha came out and sang Waiting for You with Seal. It was a bit boring, kinda like Syesha herself, but Seal was looking hunky in white pants so tight you could almost see his religion. I'm just sayin'...

The Jasonloonies must have been wetting their couches when the resident stoner came out to reprise his finest moment on the show, Leonard Cohen's Hallelujah. After another humiliating Ford commercial with the Top 12, Gaycrest gave both Davids a Ford Hybrid. You could practically see stage dad Archuleta licking his lips.

I knew tonight was going to be comedy gold, but not so early. The Top 6 girls doing a medley of Donna Summer hits was the ultimate train wreck. Watching Amanda Overmyer trying to do the choreography, sing Hot Stuff and looking inebriated to the point of blackout was worth the price of admission alone. Then Donna Summer herself appeared in a cheap wig and sang her new song Stamp Your Feet, which should be a huge hit at gay clubs catering to leather daddies. Syesha then got another pimp spot, dueting with Donna on Let's Dance. I couldn't stop laughing. Oh, and Gaycrest trying to breakdance...wooh...I need to pause and dry my eyes.

Carly and Michael Johns (looking and sounding very Princess Lounge on the Love Boat) dueted on The Letter, Jimmy Kimmel returned for some lame jokes, including one about tipping his valet, Sanjaya (who was in the audience). Then the cavalcade of has-beens went into high gear with the Top 6 boys singing a Bryan Adams medley, before he joined them to sing some new song and I Need Somebody. The boys managed to come off a bit better than the girls, but of course they didn't have much choreography. although Stripper Hernandez looked like he was working for dollar bills at the boy bar. David Cook did a duet with ZZ Top of Sharp Dressed Man. ZZ Top? Really? Is that all AI can afford -- 80s nostalgia acts? I think the producers have totally lost the plot on the demographics. But wait...then Graham Nash came out and sang Teach Your Children Well with Brook White. Really? Seriously? At least Cookie got to make lots of sex faces while stroking his axe...I'm sure the cougars were purring.

Early in the second hour, The Jonas Brothers -- who make the tween girls wet their Underoos -- came out and sang SOS, or whatever the hell it's called. Their voices are so thin and their pants so tight...talent really doesn't matter anymore does it? Not really. After a clip of some of the season's worst auditions, they brought out this year's William Hung, the flamboyant be-winged Renaldo Lapuz to sing I Am Your Brother backed by the USC Marching Trojans. Woah...this is a serious step down from when they backed Fleetwood Mac on Tusk. Paula got up on stage and was dancing around...like there's no tomorrow...yuck, yuck, yuck.

OneRepublic showed up to sing Apologize and were joined by David Archuleta. This was actually pretty damned good. Fetus should have sang this weeks ago, it totally suits his voice. Jordin Sparks came out to sing her new song, One Step At a Time, wearing one of the ugliest dresses I've ever seen -- it was like a gold, spraypainted Hefty bag. You've got some cash now, baby, get a stylist to work on that Amazon frame of yours. Us big girls gotta work it a little harder. I'm just sayin'...

Ben Stiller, Jack Black and Robert Downey Jr. (?!) were cleverly made into The Pips and inserted into a vintage performance of Midnight Train to Georgia with Gladys Knight. Ummm...Robert, you're a huge star in the number one movie in the world, whatcha doing slumming with these idiots? Stiller and Black are so past their sell by date I can smell the sour from here. Carrie Underwood, showing some serious leg, came out and sang her new single, Last Name, about getting drunk at a club, leaving with some guy in a Pinto, bangin' him, marrying him and not knowing his last name. You GO, girl. My admiration for Carrie Underwears went up a notch.

The big surprise guest was not Madonna -- as has been rumored on the blogosphere -- but George Michael. The Top 12 did a lame medley of Father Figure (Great sex face from Cookie for all the cougars), Faith and Freedom before the man himself took the stage solo to sing Praying for Time. He was not in good voice (he apologized for having a cold), was wearing sunglasses from 1978 and might have had a little knife work done. Still, he has more talent in his little over-expressive gay pinky than anyone else on the stage. Work it, Georgie.

And finally, what we came here for -- The.Next.American.Idol. David Cook! Yes, he pulled it off, pulling ahead by 12 million votes of Tickle Me Archuleta. Hey, the Terminator always loses in the end. Cookie sang his coronation song, The Time of My Life, which, while cliched as hell, wasn't nearly as bad as some of the others from seasons' past and actually had some melody.

So, that's it for another season. Thanks to everyone who checked in each week to read and comment.
Email Post
Labels: American Idol Season 7 Carrie Underwood David Archuleta David Cook Donna Summer George Michael

2. I was actually surprised that Cook won. Although Simon's little backpedaling there at the end when he said that after re-watching the show he'd been too tough on Cook was a big tip-off.

Collin Kelley said…
Good call on the Captain Kangaroo jacket. I actually had those exact words in my notes, but the post was already running long, so I cut it. I knew Cook was going to win. All the polling trackers had him by a big margin all day long.
11:19 PM

Anonymous said…
The golden hefty bag....That was the hideous point of the evening - you called it.

Thanks for your weekly posts. Aesome commentary.
1:17 AM

Montgomery Maxton said…
i watched this season in 3 different cities. thank god its over. amanda should've won.
2:13 AM

Tania Rochelle said…
Aw, be kind to Ben and Jack.

And I second the thanks for the weekly recaps. They spared me the actual watching.
8:43 AM

Anonymous said…
Thanks for the reviews. The wife was doing comedy last night, so we couldn't watch. I get the feeling your review was much better than the actual show!
9:19 AM

Anonymous said…
Thank god this is over. Now we can get back to our lives on Tuesdays and Wednesdays. Im glad Cook won. Little D will have a great Disney career or he'll turn into a drug addicted hustler once he gets away from daddy. George Michael looked bad but i loved the song anyway. are you going to recap So You Think YOu Can Dance? Please say no.

Kate Evans said…
I missed it because we were tired of paying $80 a month for cable & we cut it off last week. I saw a little of it on youtube today. Do you think Simon really wanted Cook to win which was why he was hard on him? Seems kinda obvious that the judges know the winners before the "sealed envelope" arrives on stage.

Lisa Nanette Allender said…
Hi Collin.....I caught the last thirty minutes or so, of AI's "finale". Yeah--what IS up with Robert Downey, Jr.? Well, apparently, "Tropic Thunder" is due out soon, and Jack Black, Ben Stiller and great actor Robert Downey are ALL in it. It's a spoof about the making of a war-movie. I say, with ALL OF THE REAL WARS Going on, this movie'll bomb. Pardon the unfortunate pun.
2:06 PM

Collin Kelley said…
Gav, I haven't decided if im going to recap So You Think You Can Dance. If I do, it won't be on this blog but over at EW. I'll put up a link. It starts tonight and I'm having dinner with a friend so will probably miss most of it. Ah, well...I've kinda got recap fatigue.
6:03 PM