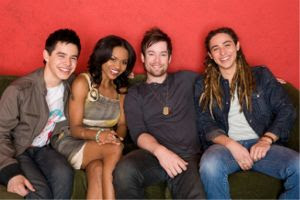 With access to songs from the Rock 'n Roll Hall of Fame inductees, there was plenty to choose from, however most fell into the category of predictable to downright catastrophic. The opening montage about the Hall of Fame and the suggestion that one of the Top 4 might one day wind up there was pushing it jusssst a little bit. On with the show...

David Cook: Out of all the songs, he picks Duran Duran's Hungry Like the Wolf? Say which? Don't get me wrong, I love the song, but this was one of the most bizarre choices ever. And, sorry all you Cookloonies, it was just ok. The thing that makes Hungry Like the Wolf one of the best 80s songs is that driving synth line, which David substituted for bombastic rock. The vocal was growly and one note. Sorry, ladies. Luckily, his cover of The Who's Baba O'Riley was a good recovery. He's sailing to the Top 2 with Tickle Me Archuleta.

Syesha Mercado: Proud Mary? Bitch, please. I've seen drag queens do better performances. Creedence Clearwater Revival might have written it, but Tina Turner owns the song, and Syesha's copycat version -- right down to the choreography -- was pathetic. Randy said she was "in the zone," but he's totally out to lunch. Only TT should be allowed to do this song...EVER. Her second song, Sam Cook's classic A Change Is Gonna Come, was turned into a big, belty Whitney-esque number. Randy didn't like it, but Paula was crying and Simon thought it was great. Her comparing the Civil Rights-era touchstone to her journey on American Idol and then sobbing uncontrollably about it made me vomit in my mouth a little. Luckily, Jason Castro was so bad, she should be safe another week.

Jason Castro: Even worse than the Cookloonies are the Jasonloonies, and I think even they are going to have hard time justifying his nightmarish decision to cover I Shot The Sheriff by Bob Marley. I'm picturing him rolling a doobie and going, "Duuuude, Bob had dreads, I've got dreads, this is perfect...durrrrrr..." The judges savaged him -- even Paula, and you know you're in trouble when Miss Pills struggles to find compliments. Simon said it was like a "first round audition massacre." But even worse was destroying Bob Dylan's Mr. Tambourine Man, forgetting the lyrics and trying to be funny -- I guess -- by mumbling some fake ones. To paraphrase Simon, pack your bags, your bong and get out.

Where's Simon's nickname? You've probably given him one, but you haven't used it in a while.

How about Mr. PMS?

Anonymous said…
It keeps getting worse and worse and I still keep watching. Jason really must go home tonight. I think he's just given up. Go smoke a bowl JC and give up the music thing.

Pamela Johnson Parker said…
Great review! Jason should be sticking to shotguns instead of shooting the sheriff. Do you think there's any possibility he'll get a sympathy round of votes over Ms. Mercado? I couldn't abide what she did to "Proud Mary." The Term. didn't do "Love Me Tender" justice. My husband says that's an easy song to sing well. (He can hit that last note, and he's 40-something. Okay, 43). "Stand by Me" was perfect. I really was surprised that he didn't go for "Unchained Melody." That's got Elmo written all over it.
9:35 AM

Anonymous said…
I think you nailed everything, though I disagree on Archuleta's Stand By Me. I realize I am alone on this, and he is definitely going top two, but I would prefer if that song was not sung perfectly so that some actual emotion/soul could pass through the words. The pain and the heart of Ben E. King's Stand By Me is what makes it one of my favorites, and Arch can't do it because his only emotion seems to be embarrassed wonder.
12:05 PM

Unknown said…
I haven't even watched Idol this season because your reviews are better than the show!
1:00 PM

Anonymous said…
Collin...I have looked forward to your reviews on this years 'Idol' every week. They are always spot on and VERY funny