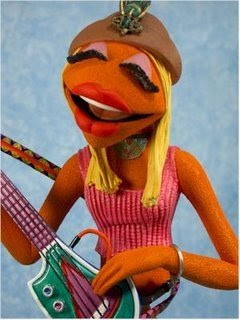 My respect for Steely Dan dropped several notches after they apparently approved the use of Reelin' In The Years for the opening group sing on American Idol tonight. I hope Walter and Donald caught this cabaret bullshit and won't ever let this happen again. They cut to Judge Judy in the audience and I wanted her to come up on stage and pound her gavel on this criminal season of American Idol. I'm over it.

The attempts by the producers to make the Top 4 relevant in the face of diminishing returns of Idol winners (Taylor Hicks and Reuben dropped by their record labels, Fantasia shuttled off to Broadway, Jordin Sparks only doing so-so) has now jumped the shark into full desperation. Sending them to see the Beatles' Cirque du Soleil performance in Las Vegas, posing them in iconic Beatles poses and arranging for a bunch of screaming women in mom jeans to line a red carpet must have been humiliating to at least one of them. I'll hand it to David "Mr. Smugs" Cook, he knows how to put on a game face amid the barrage of schmaltz. Even being forced to wear the tight matador pants in the worst Ford commercial ever -- and showcasing the Top 4's collective dumpy asses -- couldn't flummox Cookie the Combover.

Maroon 5 and former Idol Bo Bice pimped their new music. Yawn. The Q&A provided a peak into the smoke-filled mind of Jason "Janice Muppet" Castro when a caller asked what the contestants' biggest challenge had been. Jason pointed at his head and said, "Uhhh...the brain being dead." Doh!

David and Tickle Me Archuleta were sent to safety first, putting Syesha and Bongwater in the bottom two. Gaycrest said 51 million people had voted last night and the top three were only separated by about 1 million votes each. But in the end, America got it right and the Jasonloonies were unable to save him. Miss Ryan said he looked relieved to be leaving and I think that's the case. Goofy to the last, he made some comment about "shooting the Tambourine Man" and laughed and flipped his dreds around during his final sing. Luckily, there was only a minute left in the broadcast and we were spared another massacre of I Shot the Sheriff. Syesha at least owes him a handjob for saving her boring ass yet another week.

Arlene said…
adore the cover of after the poison, collin. congrats!!

have a great time in new orleans!

Lisa Nanette Allender said…
I clicked on to this post minutes after you posted it, but found it sooooo funny, that I immediately e-mailed dozens of folks to check it out, forgetting to comment!! I second what Kate Evans(above) said!
8:30 PM

Anonymous said…
I love AI! I can't believe they banned his dad. lol.

Here's some cool pics of the top 3 finalists in their hometowns. I hope David wins!