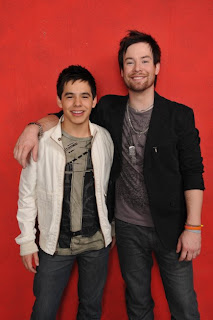 The corniness factor was off the scale tonight as David Archuleta and David Cook faced off on the American Idol finale. The whole boxing thing -- with the Davids coming out in boxing gloves, the Rocky them, the "let's get ready to rumble" guy announcing -- was so over the top I wasn't just vomiting in my mouth, but needed a bucket. The writers and producers are slowly putting the nails in AI's coffin. They wonder why the ratings are sagging this year? It's this kinda shit that doesn't sell to the teen and tween set. The Baby Boomer nostalgia trip the producers have been on all season nearly ruined the show. Anyway...

Record mafia don Clive Davis and Andrew Lloyd Webber (still slumming in LA, Lord Webber?) were the mentors. The Davids sang three songs: one picked by Clive, one of the songwriting contest entries (puke) and then a song of their choice. I'll just tell you right now, Tickle Me Archuleta came to win tonight and if I have to put it in boxing terms, the little fetus KO'd Cookie every round. I know the Cookloonies will have my hide, but he seemed really restrained, almost as if he was throwing the contest a bit. I have a feeling Cookie Combforward doesn't want to be locked into that binding contract with Clive and 19 Productions, who would pretty much run his recording career for the next decade. Unless he flopped, then they'd drop him like a hot Taylor Hicks rock.

David Cook: Clive selected U2's classic I Still Haven't Found What I'm Looking For and it would turn out to be Big David's standout moment. He looked like a rock star and the crowd was with him. The songwriting entry, Dream Big, was your standard cliched bit of pablum about faith, dreams coming true, ad nausea. He powered through it, but it wasn't his kind of song, but he did what he could with the schlock. Cookie chose Collective Soul's The World I Know, and it was good, not great. It was a little slower than it should have been, but Big D was all emotional at the end. The judges thought he did well, but not as well as the Fetus. They coronated David A. long ago, just like they admitted wanting this finale.

David Archuleta: The Terminator's mission is almost complete. He laid waste to the stage tonight and sounded perfect. I didn't hear any lyric slips or overly-botched notes. Clive had him sing Don't Let The Sun Go Down On Me (you can apply your own jokes to this...it's way too obvious for me to even bother) and he nailed it. The goopy contest entry song, In This Moment, was so horrible I wanted to claw my own eyes out, but once again, Little D turned it into a Disney spectacular. For the closing song, he wisely chose to recover Imagine. Once again, perfect.

All I can say is that the cougars and Cookloonies better be double-clicking their mice and dialing their fingers to the bone tonight, because he's going to need it to win. Or maybe, you'll realize he doesn't really want to win and let him go make his hit album on his own terms. Archuleta will fit well into the industry machine. He'll trade his overbearing stage dad for overbearing Clive Davis and go on to make tweens across the country swoon, scream and robotically sway their arms.

RJGibson said…
I got to the end of your first para and had to fight the urge to sing Fierstein's "I Puke" from Torchsong.

Anonymous said…
DialIdol website has Cook winning by a landslide but who knows? I thought David A did a better job. I think David C doesnt care one way or the other and just wants to go make an album. What are you going to do with your Tuesdays and Wednesdays now Collin?

Kate Evans said…
Cookie didn't want to sing a song he sang before because he's more of an artist; Archie's a performer.

I enjoyed both of them but hated the JUMPED THE SHARK antics of the show.
1:13 PM

Emily Lloyd said…
After hearing those song contest winners (or finalists), I have now mandated that everyone--adult, child, and cat--in my house submit a song next year. Sacrebleu!

Agreed about the boxing and especially Boomer nostalgia marketing. I kept waiting for it to be Christopher Cross week.
3:27 PM

Collin Kelley said…
Yeah, but the tragedy is that although it's an "amateur" contest, all the entries selected for this year were from songwriters and producers who have worked with past Idol contestants. No joke. It's a total sham.
3:45 PM

Collin Kelley said…
Yes, RJ I did hear about Steven Moffat taking over Doctor Who. I think he'll do a spectacular job.
3:45 PM