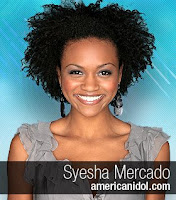 As expected, Syesha Mercado was sent home tonight on American Idol. She was no match for the juggernaut of David Archuleta and David Cook, who were coronated as the final two weeks ago. There were 56 million votes cast, but no word on how that broke down between the Top 3 -- not that it really mattered.

The hour-long results show was mostly taken up by video packages of the Top 3 going home for interviews, concerts and embarrassing "grip and grin" photos with local politicians and VIPS. But before that, Fantasia "Bobo" Barrino returned with flame red hair for a slightly raunchy -- for AI anyway -- performance of her song, Bore Me. This was right after Gaycrest had admonished Paula for her lowcut dress and Simon for his open shirt on a "G-rated" show. Well, Bobo turned it into at least PG-13 as she dropped some of the nastiest funk ever witnessed on the Idol stage. The song was kinda all over the place, but I found myself wanting to download it from iTunes. The look on Simon's face and his jaw on the table really said it all. You go, Bobo!

So, the Top 3 went home and cried. All of 'em -- including Cookie Combforward. It was obvious Cookie and Tickle Me Archuleta had bigger crowds. Little Fetus couldn't stop saying "gosh" and Cookie was mobbed by cougars, including a woman who had driven 10 hours just to get a glimpse of the rocker. Syesha had a few less, but also had babies shoved at her and the mayor of her town, literally, doing handstands. The things people will do to get on television.

There was the usual group sing of Ain't No Stoppin' Us Now, which had the worst choreography ever and proved once and for all that Little David can giggle but he sure as hell can't dance. Ghosts from the season past -- David "Stripper" Hernandez, Kristy Lee Cook, Michael Johns, et al -- were in the audience, as was Andrew Lloyd Webber. Doesn't he have a new musical to write?

The finale is next week and chances are it's going to be a bloated multi-hour affair with performances by the axed contestants, former winners (and losers) and assorted B-list singers who need a career boost.
Just for Lisa, here's Bobo's performance! Watch for the look on Simon's face at the end. Priceless!
Email Post
Labels: American Idol Season 7 Fantasia Syesha Mercado

Anonymous said…
Wow you were quick on the draw tonight. Im still at work so not going to see the show but it was just as I expected. Thank goddess its almost over.

Lisa Nanette Allender said…
Thank you Coll, for the fun update...Wish I had caught Fantasia, I like her.
11:45 PM

barriobag said…
Why was Simon so freaked???? Fantasia the rocker, rapper, unknown??? See what happens when you cut losoe from AI?

I think "Cookie" will be the big DOUGH BOY after tonight. :-)

Love your blog - made the show all the worth while.

Montgomery Maxton said…
i was going to ask if she was the one that ruined oprah's bway show. i was right. and now i know why.
2:35 AM

Lisa Nanette Allender said…
WOWWWWWWWWWW!
I think I'm in love with Fantasia!
1:12 AM

Clare said…
I wasn't keen on Fantasia's performance but Simon's face was highly amusing.
11:14 AM