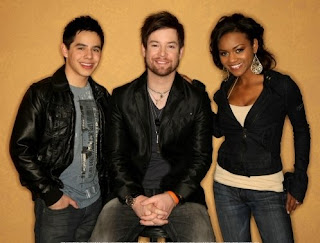 The decision to ban Tickle Me Archuleta's whacko stage dad from rehearsals has dominated American Idol since late last week, overshadowing The Top 3 and next week's finale. The rumors about Little David's papa turned out to be true, and the shit hit the fan last week when Daddy Dearest switched up the lyrics for Stand By Me to include lines from Sean Kingston's Beautiful Girls, which samples the classic song. The producers had told him this was not allowed because the show didn't have clearance, but David A. sang it anyway during the live show costing AI untold dollars in royalties.

Not that it matters at this point. It's definitely a David Archuleta vs. David Cook finale, so I hope Syesha Mercado is packing her bags. Tonight's show was merely a formality. The Top 3 sang three songs each -- one chosen by the judges, one of their choice and one selected by the producers. It was, in a word, boring.

David Archuleta: Paula picked Billy Joel's ballad And So It Goes and he knocked this one out of the park. It would turn out to be Squinty Elmo's best performance of the night. What's up with the Members Only jacket and skinny tie? Is that back in fashion? I got a closet full. David's choice was Chris Brown's With You. Hilarious! Hearing the little puppy sing about kissing and hugging a girl, not to mention calling her "my boo" had me rolling on the floor. Simon accurately described it as a "chihuahua trying to be a tiger." Awkward and skeevy are more like it. The producers selected Dan Fogelberg's Longer, a 70s pop ballad that has enough schmaltz to put the average listener into a coma. For a show trying to be hip, the producers proved they are a bunch of oldsters who not only don't have their finger on the pulse of today's youth, but may not have a pulse themselves.

Syesha Mercado: Randy chose Alicia Key's If I Ain't Got You and it sounded fine, but was basically a copy of the original. Her ball gown attire seemed over the top. Her choice of song was Peggy Lee's Fever. She vamped around the stage in a skirt cut up to her cho-cha and writhed around on a chair, but the arrangement was messy and her interpretation was too mannered. Simon called it "lame cabaret." For the producer's choice, it was the song Hit Me Up from the Happy Feet soundtrack. It's a Rhianna-ish song, and Syesha was shaking her money maker in some tight jeans, but it was just karaoke and she didn't seem to enjoy herself. Paula, in possibly her most lucid moment all season, summed it up: "I don't think it's good enough to make the finals." See ya, Syesha.

David Cook: This was definitely Cookie Combforward's night. Simon chose Ewan MacColl's classic The First Time Ever I Saw Your Face, which was famously covered by Roberta Flack. He did a straightforward, fairly restrained version except the power note at the end, which gave him hernia face. Despite that, this was my favorite performance of his all season. His choice of Switchfoot's Dare You To Move was predictable frat rock, and I hope to god he can break free of this when he gets out on his own. He needs a more definable sound to call his own. Aerosmith's I Don't Want To Miss A Thing is the ultimate in bloated mid-90s rock balladeering and David managed to pull it off, despite an even more bloated arrangement, robotic arm-waving by the bimbo's in the "mosh pit" and the song's writer -- the mistress of pop schlock, Diane Warren -- sitting in the audience.

Tomorrow night we'll have to sit through an hour of tedium to see Syesha go home. They should just call a press conference, make the announcement and show a repeat of Hell's Kitchen.
Email Post
Labels: American Idol Season 7 David Archuleta stage dad

Kate Evans said…
OK, I'm officially a dinosaur. I LOVED Archuletta's version of Fogleberg. And to top it off, when I told my students to give me a self-addressed stamped envelope if they want their final papers back with comments, one of my students asked me this week, "I need stamps? Um, where do I get them?" I think they think when I was writing papers in college I was chiseling into a stone tablet.
11:48 PM

Anne Haines said…
Did you catch when Paula congratulated Syesha on making it to "number three"? The conspiracy theorist in me definitely pricked up its little ears at that one... yeah, the David/David finale has been set for a while now. Yawn.
4:17 AM

Tania Rochelle said…
I stopped watching a long time ago. I prefer to read your recaps.
7:53 AM

Anonymous said…
I missed the first half but i see I didn't miss much. The show just feels stale now. They should really pull the plug. I wonder if David A. got a beatdown by his daddy for deciding to sing that Chris Brown song? You know he would have put a stop to that.

Lisa Nanette Allender said…
Collin, I haven't been watching the past few weeks, so it was a surprise to read about the royalties AI owes, etc. Kind of shocking, actually...
and hey, of course "Members Only" is back--we had a brief "post" about it awhile ago here--or was it at my blog(?)-- remember?I'd LOVE to see you in a cute, skinny tie, and M.O. jacket!
As for the outcome--you know what COULD happen? The votes could be "split" between David vs. David, and Syesha could STILL end up in the finals.
LOVED your re-cap.
Hernia-face? That was hilarious!
9:41 AM

Jennifer said…
Archuleta's Dan Fogelberg cover made me want to puke. Later, last night, my dog did puke, big puddle on my bedroom floor, and I know it was because she was flashing back to that performance. Poor puppy!
3:48 PM