Blogging from the Vieux Carre 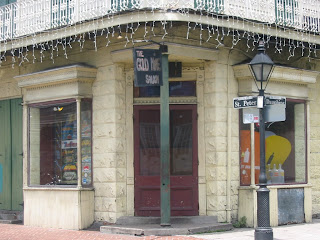 I've arrived and I'm alive. It is absolutely amazing to be back in New Orleans after more than seven years! The drive down was pleasant and uneventful with good company from Megan Volpert and her partner Mindy. I'm staying at the swank Bourbon Orleans hotel right behind Jackson Square. Bourbon Street was packed tonight.
But coming in on I-10 was a complete shock. So much devastation still visible. It was almost too much to comprehend. The hotel I stayed in the first year I came to New Orleans in 1992 is nothing but a shell. The shopping center across the street has been demolished. So many buildings and homes are just ruins. When we got off the express way at Claiborne Avenue, the remains of fast food restaurants, grocery stores and businesses are boarded up reminders. Nothing has been done to clean them up, reopen them or just demolish them. Some of the roads in the Garden District are still damaged. We had to maneuver the car over what was basically a ledge, drive down into a hole and come up the other side. However, once you get into the Central Business District and the Quarter, it's almost like Katrina never happened.
What is still here in this fabulous city is the energy and spirit of the people who carry on. I just got back from reading at the Gold Mine Saloon on Dauphin Street. It's one of those legendary places every poet should read in and I had my cherry popped tonight. James Nolan read from his new book of short stories and was hilarious. The other folks reading were just bizarre. There was one kid channeling River Phoenix from My Own Private Idaho, who kept walking like a duck and screaming, then kissing the microphone and falling asleep. Another guy had an Eraserhead haircut and was wearing a billowing, ruffled "Shakespeare" shirt. Some drunk Charlie Brown-looking motherfucker kept going on and on about how he was scared of hip hop. A girl read three of her 2,001 sad love poems. It was like performance art. I thoroughly enjoyed myself.
We ate Cajun food at Coops over on Decatur Street and walked all through the Quarter and by the beautiful St. Louis Cathedral. It's hot and sticky, and I'm trying to re-acclimate myself. I do love this place. Off to bed. A busy day tomorrow with panels and workshops.
Email Post
Labels: Gold Mine Saloon Hurricane Katrina New Orleans

Anonymous said…
sounds like a blast. though the stuff about new orleans' destruction is killing me, still.

have a pimm's cup at the napoleon house for me (assuming it's still there).
9:59 AM

Anonymous said…
Congrats on your reading...glad you are having fun. Jealous of your fancy hotel stay!
6:42 PM

How long does it take to drive down there?
7:26 PM

It is sad indeed to hear of all the damage still so evident(from the lack of response to Katrina), but quite uplifting to hear of New Orleans' spirit!
8:34 PM

ButtonHole said…
I haven't been to New Orleans since Katrina and wasn't sure I ever wanted to return, but you've revived a bit of N.O. fever in me.

Have fun! Read pretty! (probably only southerners would recognize that bizarre use of "pretty" huh?) Loved your take on the performance art!
4:21 AM