Atlanta Is So Gay 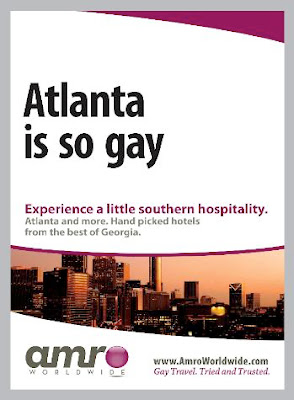 Duh!
This poster -- along with others touting American cities and states as being gay friendly travel destinations -- are all over the Underground in London coinciding with their Pride celebration. The adverts were created by Amro Worldwide, a gay travel and tourist company. A similar poster that claims "South Carolina Is So Gay" has brought out the Bible-thumpers and politicians who say it's sending the wrong message. The state's tourism board signed on to the campaign, but now the state doesn't want to pay. Gay for pay....hmmm. I've been to SC many times and never found it particularly gay myself. Atlanta, on the other hand, is one big queen.
Email Post
Labels: Amro Worldwide Atlanta Is So Gay London Pride South Carolina Is So Gay

Lisa Nanette Allender said…
I think it's hilarious that South Carolina is worried about the "message" it is sending. Tourists are tourists. Outreach to gays is no different than outreach to people of color, etc...Having said that, I agree with you Coll, I never noticed a real "gay presence" in South Carolina, though I've never been to any of their beaches.(Except Hilton Head, years ago)
11:02 AM