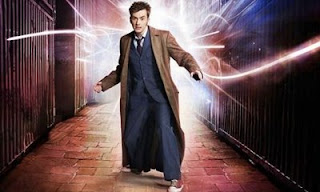 David Tennant announced today that he would leave Doctor Who after a series of 2009 specials. Read the story on the BBC at this link. I know that part of the Doctor mystique is for the character to "regenerate," but Tennant has been the best Doctor ever. Tom Baker is the sentimental favorite from the early days of the series, but Tennant will always be my Doctor. Tennant has been on the show since 2006 and doesn't want to be typecast in the role. The reason there's only four episodes in 2009 is because Tennant is onstage in Hamlet. That means when Doctor Who returns for a full series in 2010, there will be a new face. The least they could do is bring back Catherine Tate as the companion for another series. That would soften the blow. Okay...not really.
Email Post
Labels: Catherine Tate David Tennant Doctor Who Tennant quits Tom Baker

RJGibson said…
Sigh. This simultaneously sucks and blows.
12:04 AM