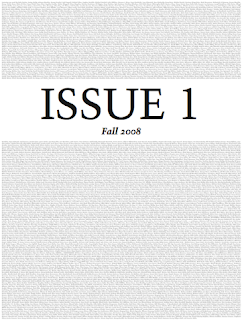 So some "researchers" going by the names Vladimir Zykov, Stephen McLaughlin and Gregory Laynor have published a 3,758 page "anthology" of "poems" at ForGodot.com by just about every poet mentioned on the internet. From Jorie Graham and Fanz Kafka to Rachel Mallino and little old me. It's a free, downloadable PDF. My "poem" is called A boy of territories and is on page 3,157. My blog won't let me do the random indentation, but here are the words:
A boy of territories
Like exceptional masses
Get my pile
I wander at night
with the quick
leagues
This implement may come and proscribe,
but it is smoothly yellow
The wrestlers of a faded brain
run themselves, kept, struggled-a glee
to their boys
like slow territories
A ken is secretarial
between this sight
and that sight
I can feel the spate of the
theme
Then the throat
Belong
Of course, I didn't write this. It seems to be the ultimate experiment in flarf. Some have called it culture jamming. Maybe it's a statement about the proliferation of online poetry. The "researchers" seem to have aggregated the most used words in poetry, or stolen random lines, and regurgitated/reassembled them into new poems and assigned random names to them. Some poets are not happy about it; some find it amusing. I actually like the title of mine, and since I...ahem...wrote it, I might just use it. I also like the line, "I wander at night with the quick leagues." When I first heard about this via Evan Peterson's blog (he's in the "anthology," too), there was concern the "researchers" were going to randomly steal poems from the net without permission. After reading some of the horrible assembled poems, some poets might have preferred theft.
After apparently being bombarded, one of the "editors" released this statement:
On Friday at the latest, I'll post a pdf that will take you a few minutes to download. It will contain original contributions from each of the poets previously listed, as well as another two or three thousand. I'm waiting on a few stragglers. So keep yr aggregators tuned this way etc. etc., and rest up good. If you're up to it, I'd suggest gulping the magazine whole, for 83 straight hours of transcendent poetic revelry reflecting the whole panoply of human achievement, emotion, wistfulness, and athletic achievement.
In England, they call this "taking the piss."
Email Post
Labels: ForGodot.com poetry anthology

Allow me to make it clear that I wholeheartedly support this piss take. I'm not crazy about the work attributed to me, but I defend these artists' right to satirize me.
12:28 AM

Collin Kelley said…
Yes, but it's not even satire is it? We're just random names assigned to random words. We are flarf in the wind...
1:06 AM

jaxx said…
this is one of the very strangest projects -- is it even a project? -- that i've ever heard of. who has the time to waste on something like this ... and for what? i can't figure it out. the ultimate dada experiment or something?
5:08 AM

Rachel Mallino said…
I'm having a hard time wrapping my head around my feelings about this flarf.

I'm not so much angry as I am saddened. And not saddened because my name is attributed to a p.o.s. poem that I didn't write, but saddened by the mockery of our art.

Everyone in the world is ego driven, in one form or another, some more-so than others. Hell, I think my dog is ego driven at times. That whole idea is stupendously stupid and no "a ha" moment has occurred.

Funny? almost.
Enlightening? if only they were smarter than they actually are.

Radish King said…
I think it's funny as hell. I haven't checked the names list (I'd go blind) and I won't download it but I love its wide-spread ripple through POETRYWORLD and the fact that it's harmless and brave and brand new. Anyone who would want to sue over this has lost their sense of humor.

Radish King said…
ps. As far as I can see, the art of the thing lies in the ripples caused by its existence. Though hardly new (thank you Marcel Duchamp), it is indeed a smart bit of performance art and it's refreshing to find the group mind swing toward something other than MFAs and Sarah Palin.
11:57 AM

Radish King said…
pss. Haha, I totally contradicted myself in those two posts. I wrote it is new and it is not new. What I meant to write is that it is new in this tight-knit little poetry community though not new, art wise, but whatever is? All art is derivative.
12:00 PM

Collin Kelley said…
Silliman is way off base. I have a feeling part of this "project" was to see whose ego would blow up like a Macy's parade balloon. When you become a "public figure," you open yourself up to lampoon, criticism and mockery to go along with all the accolades. All the poets claiming they "didn't write that shit" are overreacting. No one is ever going to believe they wrote the random lines attributed to them. The "researchers" are making a statement. We might not understand or like it, but my suggestion to all the angry poets is...walk it off.
1:01 PM

DeadMule said…
When I found out I was "famous enough" to be ridiculed, I felt as though I'd arrived. LOL

Pris said…
Oh my. I found out about this from Robert Brewer's blog. He mentioned the names of a few people he knew that were in it and I was one. I can't find the PDF link he talks about on your link, but even if I could, I don't think I could comb through it to see what random words they assigned to me. I'll pay anybody five bucks to find mine and copy it, then post it in a comment on my blog. Sigh.

Since everybody knows this is a random generation of words and our names are the only things of ours being used, what can we complain about?? We have 15 seconds more of unwarrented fame:-)

Colling, where IS that PDF link?

Collin Kelley said…
Pris, just go to ForGodot.com and scroll down until you see the cover image for "Issue 1". The download link is underneath.
6:24 PM

Anonymous said…
You sparked my curiosity, so I checked the thing out. I appear no where, in any form, for which I am either grateful or irked.
12:07 PM

Anonymous said…
Ha...''taking the piss''...that has to be one of my favourite phrases...and yes, I'm English.
Just called here after reading Pris' post about the same on her blog.
Strange goings on in my humble opinion!
4:09 PM