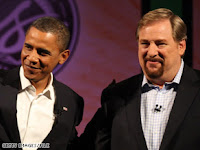 I was proofing pages for the magazine this morning and returned to find numerous emails and news reports about Obama choosing Rick Warren to give the inaugural invocation. It's a very disappointing choice, despite Obama's comment that he wants to be all inclusive, extend an olive branch, blah, blah, blah. That's very presidential of Obama, but giving a virulent homophobe a prime time gig just legitimizes Warren's stance and is a slap in the face to the GLBTQ community who earnestly supported him. Obama defended his decision and said this in a news conference this afternoon: "I think that it is no secret that I am a fierce advocate for equality for gay and lesbian Americans. It is something that I have been consistent on, and I intend to continue to be consistent on during my presidency."
And while I applaud Obama's idealism, the reality is that if McCain was being sworn in on Jan. 20, he wouldn't have extended the same courtesy. The Christian right wing doesn't do olive branches -- no matter what God or Jesus said -- and Warren's Saddleback Church fought hard for the passage of Proposition 8 in California. Warren has been quoted as saying about gay marriage that the country shouldn't give in to what "two percent" of the population wants because Jesus wouldn't like it.
I haven't lost my faith in Obama, but I'll be watching closely to see if his "fierce advocacy" remains intact as he moves forward. He doesn't need to pander to the right after eight years of neocons sweeping human and civil rights under the rug. It's not progressive and it's not what America needs.
Email Post
Labels: inauguration invocation President Barack Obama Proposition 8 Rick Warren Saddleback Church

Anonymous said…
Yes, it's really unacceptable. And something to be more than disappointed about.
3:55 PM

DeadMule said…
I understand the disappointment. But folks, this is exactly what Martin Luther King Jr, would have done. King saw no inconsistency in 1955 in joining both the NAACP and the (mostly white) Alabama Council on Race Relations. He couldn't understand why people saw controversy in this, when he saw joining both as complimentary.

Just as King approached the race problem from both sides, Obama may be approaching prejudice against gays in this manner also. Obama will be the POTUS and, as such, hopes to make us see we are all Americans. Having unity as a goal does not negate fighting prejudice and hatred against gays. We should all fight for nothing less than equality. Obama knows what the "prize" is.
4:31 PM

Anonymous said…
I see what Obama is trying to do and I applaud his idea of unity but I just wish it could have been someone else. Even McCain isn't as conservative as Warren. I just don't think it was a smart choice with everything that's going on here in California. Does Obama really think having Warren give the invocation is going to make him and his followers change their minds about gays and lesbians?

ButtonHole said…
I was essentially going to say exactly what GAV said, but probably not as well or concisely!
8:27 PM

Lisa Nanette Allender said…
I'm with you, Coll. As a member of Pax Christi, I'm ALL FOR Peace & Unity, but as GAV succintly points out, he certainly could've chosen someone else. And while Rick Warren is not Donald Wildmon(the God Hates Fags/AIDS=Hell-monger, Rick Warren is certainly intolerant and I believe, homophobic.
Better choices:
Fr. Roy Bourgeois(the liberal, peace-loving Catholic priest)
Sr. Helen Prejean(author of Dead Man Walking, opponent of capital punishment)
Rev. Gene Robinson (an Episcopal Bishop, the first openly gay person to be chosen for that title).
As POTUS, he could've set a huge example by choosing a Cleric who truly supports ALL of us--that's my def. of Unity!
8:29 PM

Maggie May said…
i just read this before i read your posting, collin:

As gay activists protest the selection of evangelical megapastor Rick Warren to give the inaugural invocation, they could have reason to cheer a future Obama announcement. Sources tell NEWSWEEK that the president-elect is considering the appointment of the first openly gay chief of a military branch.

Collin Kelley said…
I've heard that rumor as well Mags. It would be a nice counterbalance for Obama to appoint an openly gay man to a military appointment.
12:15 AM

Anonymous said…
regardless of my personal feelings about who I would rather see up there, I am not at all surprised about Rick Warren. The inaugural bill is filled with lefties, artists, creatives, progressives, activists - I've never been happier.

But remember, when Obama gave the "acceptance" speech, he said to the Right Wing Republicans he would be their president too. I think you'd be hard pressed to find a preacher "they" love who isn't voting down gay rights.

Like he promised and like he did during the election - he's trying to bring all types of folks together. An inauguration with no right-wingers would completely alienate that final group of citizens.
12:23 PM

Collin Kelley said…
I know it's un-pc and all that, but I wouldn't mind a little alienation of the right-wing, Christian crazies. They've had a bully pulpit for eight years and made every effort to marginalize, disenfranchise and send the GLBTQ community back to the closet. Fuck 'em.
1:30 PM

Anonymous said…
Yes, I would like to banish them all to the hell they promise is there for us, but that ain't President Obama's style. I think it's why we like him...
2:12 PM

Unknown said…
I agree with you.

DCH said…
I think Obama is going to be an interesting - and hopefully very effective - President... but I hope people aren't expecting ardent idealism from him. Obama is a masterful politician (that's what it takes to become a US President), and learned his craft in CHICAGO. Part of winning the Presidency, unfortunately, is saying what's needed to win. I've already been surprised by many of his cabinet picks.

Obama knows that his first term is the "campaign" for his second - so don't expect anything radical from him. Second term? maybe, even probably. But he'll play it safe for the first.
11:05 PM

jaxx said…
voting down gay rights is one thing.

comparing us to pedophiles (ie, sociopaths), suggesting we can be cured (ie, a bunch of sick fucks) is another thing entirely.

if you must have a christian preacher at the inaugural (and i'm not convinced that we need one) there are plenty to be found who do not spew the hate and intolerance that come from this man, even if they are not in favor of gay rights.

i am absolutely sick over this.

i'm even trying to find a way to write to aretha. i wish she'd take a stand for us! that man has no place on that podium.
7:57 AM

Lisa Nanette Allender said…
Whew, Coll, this is sooooooo controversial.
Yes, Jaxx, I just read at salon.com the more recent quotes from Rick Warren--comparing the LGBT community(who he says constitutes "2%" when we all know quite well that we are at least 10% of this country)to those who commit pedophilia, incest, and other crimes. It is indeed despicable.
I love the idea that by engaging Rick Warren(who has broken with most right-wing evangelicals on Climate Crisis/Global Warming, for example)we can all begin the long-overdue work on the environment. And it'd be great to believe that the right-wingers who DEFINITELY voted for McCain, will see this Presidency as BLESSED by "their" preacher. But it still is absolutely unacceptable that in order to "pay" for that, once again, the entire LGBT community, gets thrown under the bus.
Let's hope the comment saying there'll be an appointment of an "out, gay" military person, is true. It would be a help.
btw, there will be a gay marching band playing at the inauguration, not that it's much consolation. sigh.
My word verification here?The word, "union" !
That's just too weird.
11:01 AM