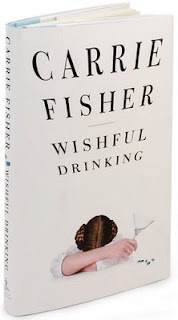 A memoir about drug abuse, sexual compulsion and manic depression shouldn't be this funny, but in Carrie Fisher's hands it's a laugh riot. Wishful Drinking ($21, Simon & Schuster) is slim, packed with photos and basically the script for her hit one-woman show of the same name. Fisher calls this book a "a really, really detailed personals ad," and covers everything from the dead, gay Republican in her bed (which was tabloid fodder for weeks in 2005), her missing-in-action, over-the-top parents (Debbie Reynolds and Eddie Fisher) and, of course, plenty of anecdotes about playing Princess Leia in the original Star Wars trilogy. I plowed through it in one evening, laughing out loud.
Fisher has a knack for making the heartbreaking hilarious and there's probably more truth packed into these 176 pages than found in other "memoirs" twice this size (Jane Fonda's bloated tome comes to mind). She talks honestly about her marriage to Paul Simon, her second husband who left her for a man, her father's womanizing (most notoriously leaving Debbie Reynolds for Elizabeth Taylor after her third husband, Mike Todd, was killed in a plane crash), and her electroconvulsive therapy, which she says has done her more good than a dozen shrinks and their pills. Her recollections of Debbie are endearing and juicy, including her gift of a vibrator to 15-year-old Carrie and having Cary Grant call her daughter not once, but twice to talk about the dangers of dropping acid.
Perhaps the most hilarious chapter in the book is Carrie's diagram of her whacked out family tree (complete with photos and linking arrows) as she tries to figure out if her teenage daughter is committing incest by dating Elizabeth Taylor's grandson. I actually wish I'd bought the audio book version, because hearing Carrie read this aloud must be a scream.
Email Post
Labels: Carrie Fisher Wishful Drinking

Dustin Brookshire said…
I think I'm going to have to buy a copy of Fisher's book.
10:44 PM

Maggie May said…
i look forward to reading this. she's kind of terrifying/funny. one of those mixes that you laugh at...from a distance.
11:03 PM

Anonymous said…
Just downloaded the audiobook from iTunes. She is totally crazy but I love her.

Rupert said…
Postcards From the Edge blew me away years ago, but this one sounds even better! That mean old Liz Taylor stealing Eddie Fisher was SUCH a scan-dal, lol
9:09 AM

Lisa Nanette Allender said…
Now this sounds like a hilarious way to kick off the New Year!
I plan on reading this in bed, as I recover. I'm told laughter helps you heal, 5 times as fast!
2:06 PM

Karen J. Weyant said…
I so want to read this memoir -- I thought her novels were hysterical. (It's hard to believe Ms. Fisher played Princess Leia!)
5:47 PM