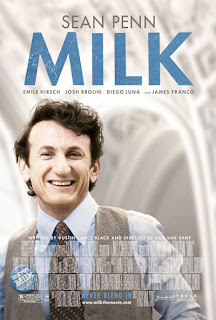 History repeating. That's what I kept thinking while watching the brilliant Milk this afternoon. Thirty years on from Harvey Milk's assassination, the GLBTQ community is still fighting for its civil and human rights. Milk's release could not have come at a more prescient time as protests and rallies continue around the country at the passage of Proposition 8 in California. If Harvey Milk were alive today, I have a feeling he would have been at the forefront of the opposition.
Milk was America's first openly gay elected official, winning a seat on the San Francisco Board of Supervisors in 1978. He was assassinated later that year along with Mayor George Moscone in City Hall by Dan White, the deranged former city supervisor who had sparred with Milk over various issues. The movie is not about the assassination, but a celebration of his life, activism and how San Francisco became the heart of the gay rights movement that continues today.
Let me just throw this out now and get it over with: Milk is Sean Penn's finest hour as an actor. He should be a lock for Best Actor at the Oscars. Penn has always been a great performer, but what he does with Harvey Milk is fearless, nuanced and believable. Milk's over the top personality could have easily descended into caricature, but Penn inhabits him so completely that you never once think you're watching "Sean Penn" on the screen. It's an amazing transformation and one of the finest performances I've ever seen.
The supporting cast is no less than stellar: James Franco as his lover, Scott Smith, is not only some damn fine eye-candy, but like Penn, he plays the part with such subtlety and grace; Emile Hirsch as Cleve Jones (who would go on to found The NAMES Project) is almost unrecognizable with his curly mop of hair and oversized glasses; Joseph Cross, so horribly miscast as Augusten Burroughs in Running With Scissors, redeems himself beautifully as Dick Pabich, Milk's friend and advisor; Alison Pill is the no-bullshit Anne Kronenberg, Milk's feisty lesbian campaign manager; and Diego Luna as Milk's last lover, Jack Lira, is heartbreakingly real. I keep coming back to the word "nuanced" because that's what every actor brings to the ensemble. Like Missing, which I wrote about last week, you forget these are actors playing parts because Milk unspools like a documentary.
Milk is director Gus Van Sant's greatest film to date, surpassing even My Own Private Idaho. He seamlessly blends archival footage of San Francisco in the 1970s with his own to expertly capture the city. Milk opens his camera shop in the Castro and it quickly becomes a neighborhood hangout, evolving into an activist center and campaign headquarters. Van Sant (thanks to Dustin Lance Black's excellent screenplay) captures the urgency and immediacy of Milk's campaign and the issues facing the gay community in the 1970s. A good portion of the film is taken up by Milk's fight against Proposition 6, which sought to expose and fire gay teachers in California. The measure was ultimately defeated with the help of Milk's activism not only in San Francisco, but around the state as he spoke out against anti-gay crusaders Sen. John Briggs and Anita Bryant, the bigoted singer who looms large in the film as the voice of division and hate.
Milk was no stranger to death threats and they started coming early in his political career, but he was undaunted by them. Although we know what happens to Harvey in the end, it's still shocking to watch Dan White (a creepy Josh Brolin in full-on confused Catholic mode) walk into City Hall and kill Milk in cold blood. The archival footage of the 30,000 people marching to City Hall in a candlelight memorial for Milk and Marcone still has the power to move and sadden. Thirty years on, the GLBTQ movement is at another defining crossroads and, quite frankly, we need another Harvey Milk. We need a fearless man or woman to stand up and become the voice that by sheer force of will and determination makes people pay attention. That kind of voice is sadly missing right now.
Several times in the film, Milk makes his trademark statement -- usually over a bullhorn -- to gathered crowds: "I'm Harvey Milk, and I'm here to recruit you." Since Harvey is gone, we all need to be his voice right now. We need to unify and fight against the new bigots who want to strip Americans of their civil and human rights. So, I'm recruiting you to go see Milk and I dare you not to be moved and motivated by this powerhouse of a movie.
Email Post
Labels: Gus Van Sant Harvey Milk James Franco Milk San Francisco Sean Penn

Dustin Brookshire said…
I saw MILK a month or two ago when invited to a prescreening. I loved it... can't wait to buy it.
10:21 PM

Anonymous said…
Well... aside from Van Sant, was anyone gay even involved with the film at all? I mean, of the marquee actors literally none are gay! Penn, Franco, etc etc... none are gay. Are there seriously no gay actors to fill those roles?

It just seems, in light of the subject matter, richly ironic; it would have been a nice chance to showcase a gay leading man, if nothing else.
4:28 AM

Collin Kelley said…
Gay leading men? Who are we talking about exactly? All the Hollywood "leading men" are still in the closet.
9:18 AM

Radish King said…
Great review, Collin. This is my must see movie for Christmas. I adore GVS, who uses the northwest so brilliantly in his movies.
10:02 AM

Maggie May said…
i really look forward to this. i have a certain kind of crush on Sean Penn. you can see how he could be really arrogant and infuriating and stubborn, but also brilliant, passionate, moving and empathetic.
12:00 PM

Anonymous said…
This would have been a good film to introduce the concept of "gay leading man" - that's exactly my point.
4:21 PM

Collin Kelley said…
^ I'll have whatever you're smoking.
4:31 PM

Anonymous said…
I saw it Saturday. Best film of the year. When Tom Cruise, John Travolta and Will Smith give up their beards and come out of the closet then we'll have some gay leading men. I see the morons are trolling your blog again today CK.

Anonymous said…
Awesome article, very well written. You spoil us with these great reviews. I'll definitely see this one.
4:32 PM

and sean penn is one of my all time favorite actors. if this tops his work in "isn't she lovely" it has to be astonishing.
4:57 AM