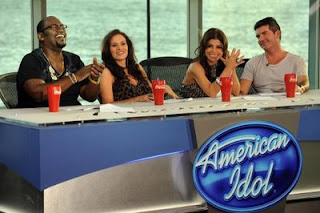 Oh, yes, it's American Idol time once again! You might have noticed the new AI section in the sidebar, which has links to other great blogs and sites also covering the eighth season of the singing contest. For the past two years, I've been faithfully blogging about the show everyone loves (and loves to hate), and I've got my snark all sharpened up for the new series. American Idol premieres tomorrow night -- Jan. 13, 8 p.m. (ET) -- and my first post will appear shortly-thereafter. There will be spoilers if you live in other time zones, so you've been warned. I've also repositioned the Subscriber links so you can easily bookmark Modern Confessional and follow the blog, whether it's for Idol or any of the other topics that come up here.
The big change for the season is the addition of failed rocker/hit songwriter Kara DioGuardi (pictured with Randy Jackson, Paula "Miss Pills" Abdul and Simon Cowell in the photo above) as a permanent judge. DioGuardi has written hits for Pink, Kelley Clarkson and even co-wrote Kylie Minogue's big hit, "Spinning Around," with Paula. The general thought is that Paula's crazy train has finally jumped the tracks and she will be transitioned out with DioGuardi in place for 2010. There are rumors that Paula is developing her own talk show (?!!!), plus she's selling her jewelry on HSN and dealing with stalkers. One killed herself outside Paula's house late last year, and Paula blamed the producers of Idol for letting her get into auditions. Apparently, another of Paula's stalkers had to be removed during audition taping for this season. There's a whole lotta crazy around Miss P.
The Modern Confessional does tend to get Idol-centric around this time each year, but never fear: there will be plenty about writing -- both poetry and prose -- interspersed between all that Idol.
Email Post
Labels: American Idol Season 8 Kara DioGuardi Paula Abdul Randy Jackson Simon Cowell

Anonymous said…
I cannot believe its time for this again. Damn it I will have to watch because of you. Oh well at least its free and mindless entertainment.

you should do video blogs in regards to this, you're rather funny.
12:40 AM

Anonymous said…
This will be my first Idol season with you, Collin. Reading your snark will help make it come alive for me again!
11:37 AM

Lisa Nanette Allender said…
Hi Coll--I agree with Mr. MM, video-blogging would be amazing!(but I DO love reading you)
6:14 PM