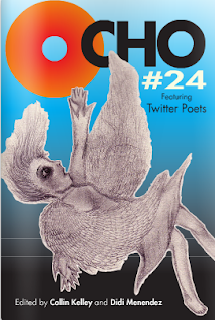 On May 11, the Poets on Twitter post appeared here on the Modern Confessional blog. The next day, Didi Menendez -- founder of OCHO and MiPOesias literary magazines -- and I discussed doing a special edition of OCHO featuring poets who appeared on the list of Twitter poets. In less than three weeks, OCHO #24 Featuring Twitter Poets is now online. You will be able to order print copies soon.
This is the power of Twitter and the Internet. In just a few short weeks, we have a literary magazine filled with some fine poets from all over the world. I think that's what tickles me the most. So, who's in the issue? Here are the contributors: Ivy Alvarez, Patty Paine, Anne Haines, Matthew Hittinger, Christine Klocek-Lim, Pris Campbell, Nancy Devine, JS van Buskirk, Kate Evans, Alex Dimitrov, Rachel Barenblat, Saeed Jones, Stacie Boschma, Ray Succre, Marie-Elizabeth Mali, Cheryl Snell, Andrew Demcak, Karen Head, Pamela Johnson Parker, Rosemary Nissen-Wade, Will Kenyon, Sherry Chandler, AnnMarie Eldon, Christine Swint, Deb Scott, Scott Edward Anderson, Samuel Peralta, Emily A. Benton, Shann Palmer, Montgomery Maxton, Christopher Hennessy, Jackie Sheeler, Peggy Eldridge-Love, Tammy Knot, Luisa A. Igloria, Robert Lee Brewer, C. Cleo Creech and Cole Krawitz.
Enjoy the poems and follow these folks on Twitter. You will see their @names next to their by-lines. In the spirit of Twitter, poet bios are 140 characters. Many thanks to Didi, who made my first guest-editing gig such a breeze.
Email Post
Labels: Collin Kelley Didi Menendez OCHO poets Twitter

Nic Sebastian said…
It looks great! So sorry to have missed the op. Congratulations! Nic
12:18 AM

Rachel Barenblat said…
Thanks so much for putting it together! I'm really enjoying reading it.
9:49 AM

Cheryl Snell said…
Fabulous job, Collin! Many thanks to you and Didi.
10:19 AM

christine said…
It's wonderful Collin! I'm amazed by how fast it all happened. Thanks to you and Didi for including me. Brilliant concept for a magazine.
10:47 AM

Cleo said…
I love this online viewing format they use. But also looking forward to ordering a couple of copies when they go live at amazon.
2:02 PM

Rosemary Nissen-Wade said…
I really love it! Such a good read (even apart from me, lol) and so beautifully presented. Many thanks to you both for this initiative, and to issuu - an interesting site I was previously unaware of - for making it possible.

Pamela Johnson Parker said…
Thanks, Collin and Didi--I'm so flattered to be a part of this.
7:23 AM

David (H) said…
Mother Mercy, this is cool. I'm on Twitter, but I've treated it like a unloaded gun at a firing range. Should capitalize on it, I see.

I'll link to this from the TEA, of course.

Nancy Devine said…
collin and didi-
thanks so much for your work on this project; i cannot believe how quickly you did it and how terrific it looks.
i'm thrilled to be included and excited to get reading now that i'm back from vacation.
9:47 PM

Unknown said…
I'm thrilled with this issue. Thanks Collin and Didi!
12:49 PM

Lisa Nanette Allender said…
WOW!
Will have to get with the Twittering!
Very impressive(once again) Coll.
9:00 AM