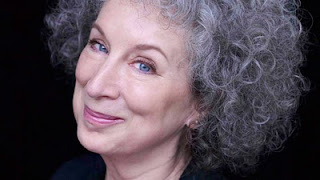 Margaret Atwood is in Atlanta tomorrow night for a reading/discussion/signing from her new novel, The Year of the Flood, at the Savannah College of Art & Design. Last week, I had the privilege to interview Atwood, who is one of my literary icons. To say I was nervous was an understatement, but she was gracious, funny and candid. My interview is online now at Atlanta INtown. If the stars align, I'll be meeting her tomorrow.
On Friday night, BFF Jennifer Perry took me to dinner at French American Brasserie (or FAB as it's more commonly known) in downtown Atlanta. I'd never been to the restaurant (which was formerly Brasserie Le Coze and located at Lenox Square) in its new incarnation. When it opened a couple of years ago, the local critics savaged the food, and it got a whole new round of controversy when the Real Housewives of Atlanta filmed the notorious fight scene with She'ree trying to snatch Kim's weave off her head. I'm no dining critic, but I thought the food was delicious (I had a marinated skirt steak over whipped potatoes, tasty bread and one of the most decadent desserts -- warm chocolate cake and sorbet -- ever) and it's a beautiful space. I'd definitely go back. 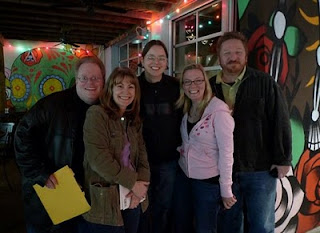 After dinner, we headed over to The Loft at Center Stage for The English Beat concert. The Beat had a number of hits in the late 70s/80s including "Mirror in the Bathroom," "Save it for Later," and when Dave Wakeling left to create General Public, the big pop hit "Tenderness." All of those and more were expertly staged by Wakeling and Co. Lot's of dancing, singing along, hand-clapping and a big blast of 80s nostalgia.
On Saturday night, we had another of our Poet Dinners, this time at Holy Taco in East Atlanta Village. Karen Head, her fiance Colin Potts (who took the photo), Megan Volpert, Cleo Creech and Julie Blomeke were in attendance. We had a lively discussion about poetry, movies, real estate and the zebra that escaped from Ringling Bros. Circus on Thursday and was galloping through the main expressway downtown tying up traffic for miles. You can read about that here if you missed it. A fantastic evening and food with friends.
Email Post
Labels: Atlanta zebra Dave Wakeling French American Brasserie Holy Taco Jennifer Perry Margaret Atwood Poetry The English Beat

Montgomery Maxton said…
reminds me of the time a cow escaped a slaughter house in cincinnati and ran amok for an entire week through the city before being caught and then bought by a compassionate farmer that let the cow live its 2nd life on his farm.
2:10 AM