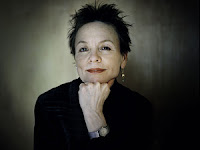 You can get a "first listen" of Laurie Anderson's long-awaited new album, Homeland, at NPR. You can hear individual tracks or the entire album, which is melodic, dark, edgy and political. There's also some lovely guest vocals by Antony Hegarty. In my opinion, Homeland is one of Laurie's best albums ever.

My BFF Donna and I went to see Laurie perform the concept show Homeland in 2008 at the Ferst Center here in Atlanta. It was right before the presidential election and emotions were running high. A few people got up and walked out of the show because Laurie made some brilliant shots at Dubya, McCain and Palin. I had the pleasure of interviewing and meeting Laurie and she was one of the most gracious people I've ever met. We were so awed by her (and the fact that Lou Reed was there, too!) that we couldn't even muster the courage to ask for a photo or autograph. After standing in the presence of one of my idols and inspirations, nothing else was required.
Email Post
Labels: Homeland Laurie Anderson

Jennifer Perry said…
I was fortunate to interview Laurie Anderson in the mid 90s for my own tv show. Gracious, brilliant, and a please as you know. Now I want to find that video!
12:16 PM

Chai said…
Your blog has been recommended to us as a interviewee's favorite blog!

We would like to do an interview with you about your blog for Blog
Interviewer. We'd
like to give you the opportunity to
give us some insight on the "person behind the blog."

It would just take a few minutes of your time. The interview form can
be submitted online here Submit your
interview.