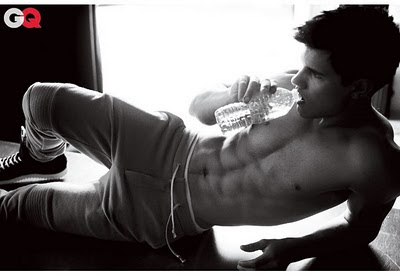 Call me pervy, but DAMN! Look at Taylor Lautner in the new issue of GQ. Yes, that's Jacob Black from the Twilight movies. He's 18, so that makes him legal, lustful eye-candy for the masses. That's one lucky bottle of water. Team Jacob all the way.

On Wednesday night, BFF Tina and I met Pam Grier again at Outwrite Books. She talked about her life – chronicled in her memoir, Foxy: My Life in Three Acts – then signed books, took pictures and was just lovely. There are pictures of us together, but it's on BFF Lisa's camera and she had an unfortunate lightening strike to her computer. So, as soon as she can download them, I'll post. I forgot my camera (natch), but I managed to get the shitty photo below of her talking to the crowd, which was huge and appreciative. She even did a Q&A. Sassy and funny as hell – that's my Pam! 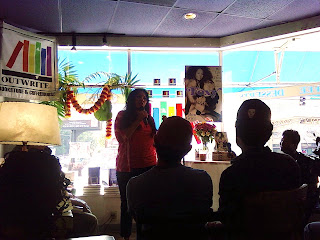 After seeing Ms. Grier, Tina and I headed over to Variety Playhouse for Concrete Blonde. It was one of the best concerts I've ever attended. Johnette Napolitano looked amazing and her voice raised the hairs on the back of my neck. I don't know how, but her voice is better now than it was 20 years ago. The band played its seminal Bloodletting album, plus hits from their whole catalogue. It was an amazing night.

Tomorrow night is the Georgia Author of the Year Awards, and I'll be in attendance since Conquering Venus is nominated for First Novel. I have a snowball's chance in hell since I'm up against the likes of Amanda Gable, whose debut was named one of 25 books every Georgian must read. Always the bridesmaid...
Email Post
Labels: Concrete Blonde Conquering Venus Eclipse gay Georgia Author of the Year Awards New Moon Pam Grier Taylor Lautner Twilight

Anonymous said…
I haven't bought a real magazine in years but I picked the GQ up last night at the supermarket. Does GQ stand for Gorgeous Queers? lolollol

TNBBC Super Mod said…
Hey Collin! I used to love Concrete Blonde. Did they do Joey? I owned Bloodletting back in the day on Cassette. Yikes!

Congrats on the nomination for First novel. Sorry you didn't win, but it must be such an honor to just get recognized for the work you do!!
10:03 AM