Past and future writing 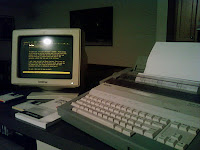 The photo at left is my 20-year-old Brother word processor. I've been carting this heavy thing from apartment to apartment since 1991 and I decided it was time to take it to an upcoming e-recycling event. But first I wanted to go through all the floppy disks (remember those?!) and see what was salvageable. Although the word processor used regular floppy disks, it formatted the documents using a proprietary system incompatible with modern computers.

I had a box full of disks filled with early drafts of poems, ideas for screenplays, short stories, early versions of my plays Porcelain and The Dark Horse, and the very first draft of the screenplay that became Conquering Venus. I also found 50 pages of a stage adaptation of The Portrait of a Lady I'd started back in the mid-90s, and it's actually pretty damn good. I don't know if Henry James' work has become public domain, but I'm going to check it out. I haven't written anything for the stage in more than 15 years, so this might be a way to slip back into it. I had also started a quasi-memoir and was stunned to find I'd written nearly 150 pages before I abandoned it.

I spent two evenings going through all the disks. Most of them I destroyed, but I consolidated documents on to three floppies and I'm sending them off this weekend to a company called Pivar that will convert the the disks' contents into Word documents. Pivar is one of the few companies in the world that still does this kind of conversion and it ain't cheap: $40 per disk. It would take months (or years) to transcribe it all and the printer part of the word processor uses  ink tape cartridges that are no longer made, so it's worth the cash.

I want to keep some of the writing from these disks for my archives, but the memoir, short stories and Portrait of a Lady adaptation are projects I would like to turn my attention back to once I finish the Venus trilogy. Speaking of Venus, I've posted an update on the second book and a synopsis on the Conquering Venus Blog. Check it out!

Thanks again to all the folks who commented on the "A larger place at the poetry table" post. Great conversation and ideas.
Email Post
Labels: Brother Word Processor Conquering Venus floppy disks Henry James The Portrait of A Lady

Karen J. Weyant said…
OMG! I had one of these -- and they were so "state of the art" at the time.

Collin Kelley said…
Karen, yes 20 years ago it was a dream. I did so much of my early writing on this word processor that I'm almost sad about letting it go, but it's time.
1:33 PM