Until the End of the World 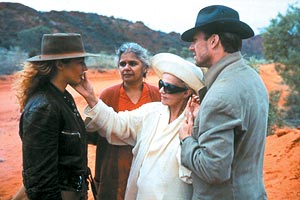 The world is supposed to end today according to some crazy Christian who combed through the Bible looking for secret numbers. Since it's lunchtime on the east coast of America and we're all still here, they ought to track down the old bastard and smite him Old Testament style for bearing false witness.

The only thing good that came out of this hoax is that I decided to watch the five-hour director's cut of Wim Wenders' classic film, Until the End of the World.  Without the movie, Conquering Venus (and the forthcoming Remain in Light) would not exist. When I came home from my first trip to London and Paris back in the summer of 1995, I saw UTEOTW and Jeanne Moreau's performance inspired the creation of Irène Laureux.

In the movie, Moreau plays a blind woman whose scientist husband has invented a video camera that captures images and feeds them into the visual cortex of the brain allowing her to see once again. William Hurt and Solveig Dommartin race around the world to collect images while a rogue nuclear satellite is falling out of the atmosphere and threatening to contaminate the planet. It's a complex, audacious film and Moreau is the heart of the story. In 2003, I had the honor of interviewing Wim Wenders for Moviemaker magazine and got to ask him about UTEOTW. You can read that interview at this link.

When I checked into the Bel Air Hotel on rue Rampon in June of 1995, my room was across the street from an apartment building. On the third floor, there was a long balcony full of flowers and the French doors were always open revealing a desk and shelves lined with books, but I never saw who lived there. So, I created Irène to fill in that blank and UTEOTW and Jeanne Moreau were the catalyst.

Remain in Light is at Vanilla Heart now and I realized today that I'm already missing the characters of Irène and Martin. Maybe I'll start the third book sooner than later. If you're looking for inspiration, find a copy of UTEOTW or another film, album or book that moves you.