Just Say No to SOPA 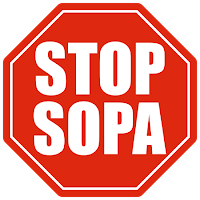 Today, many well-known websites like Wikipedia and Reddit are "blacked out" to protest the proposed Stop Online Piracy Act (SOPA) bill, which is currently being considered by Congress. At a base level, the bill is meant to stop online piracy of movies, music and copyrighted material, but the bill goes much further. If passed, as originally proposed, it would alter the Internet, squash innovation and have serious freedom of speech and commerce implications.

The film, music and television industry is woefully out synch with the century we live in. From blocking music videos on YouTube (I mean, seriously, why make a music video – isn't just a a promo for the artist?), to putting regional restrictions on DVD and download content, as well as music, media conglomerates are living in some other era and they've decided that putting restrictions on the Internet is the way to do it. Bullshit to that!

Yes, film and music piracy is a problem, but if the media companies would embrace a global perspective, it wouldn't have so many issues. The music industry reluctantly signed on to iTunes and still isn't happy that people would rather download than spend $20 on a physical CD. Artists, of course, get caught in the middle. It's no wonder that many artists are starting labels and releasing their own music rather than deal with restrictive labels.

This is a great synopsis from CNN: If SOPA were to passes, copyright holders would be able to complain to law enforcement officials and get websites shut down. Search engines and other providers would have to block rogue sites when ordered to do so by a judge. Sites could be punished for hosting pirated content in the first place – and Internet companies are worried that they could be held liable for users' actions.

The White House finally waded into the debate saying the bill could wreck the architecture of the Internet and possibly cause cyber security issues.

For a fairly clear explanation of the implications of SOPA, visit this link.

UPDATE: The American Association of Publishers is also backing SOPA, which I find incredibly disappointing. Traditional publishing is in trouble, which is why so many authors are choosing to self-pub and give away their work at sites like Amazon. Like the film and music industry, the publishing world is clutching on to vestiges of outdated thinking and consumer demand. Yes, authors and artists of all kinds want to be paid for their work, but taking a sledgehammer to the Internet is not the way to do it. There are piracy and copyright laws on the books that are not fully utilized. Rather than add more government intrusion into our lives, let's use the laws we have.
Email Post
Labels: Internet piracy protest SOPA wikipedia

Smoky said…
I understand what you are saying here, Collin, but wonder how you feel about it as a writer? Do you want to log onto WIkipedia and find your poetry in its entirety there, and not get paid for it? What about copies of Remain in Light on book sites? I know that hasn't happened, but the possibility exists as things are right now. I tell you, as an author, it worries me. Even though, if people were pirating my work, it would probably mean a lot more people were reading it than are now! LOL--I just don't know what to think of this bill.
10:18 AM

Collin Kelley said…
There are bills already in place to stop piracy. SOPA goes much, much deeper. It basically gives the government permission to block a website if its accused of copyright infringement -- with no recourse for owners of blogs and websites. For instance, if you post a music video on your blog, you might potentially be breaking the law, so if the media conglomerate sees it - kiss your blog goodbye. The bill is so broad and improperly worded that it threatens the Internet as we know it.

I'd like to be rich and famous enough for someone to want and pirate my writing. lol
11:03 AM

Thanks for clarifying SOPA for me. I've found all the discussion very confusing. And I'm a HIP! (That's Highly Intelligent Person!)
11:16 AM

Collin Kelley said…
The American Association of Publishers also backs SOPA, which I find incredibly disappointing. Traditional publishing is in trouble, which is why so many authors are choosing to self-pub and give away their work at sites like Amazon. Like the film and music industry, the publishing world is clutching on to vestiges of outdated thinking and consumer demand.
11:36 AM