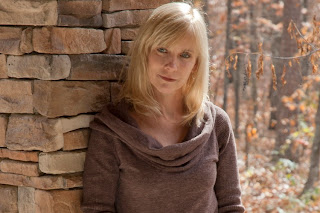 The poetry in your second collection, Armor, Amour, seems to take deeper and deeper breaths with each turn of the page. The early poems are incredibly short and economical, but then they begin to expand, take shape and, finally, become arias (complete with musical graphics). Tell us about the creation of this collection.
First, thanks for your analogy: that the book accumulates breath is such a beautiful thought. I hope readers will experience the poems as becoming more expansive, of lines filling not just more space across the page, but limning more consciousness. By the last section (“Vessel/ II”), I aim to go beyond an individual consciousness to a floating awareness, an eternal consciousness that drops like a waterfall from being to being across time (from Buddha to Mary Magdelena to Whitman to Black Elk to contemporary artists and thinkers). I had to think back to the writing of the poems: some of them were written several years before my first book was published. However, the time I had to let these poems sit and change form became a tremendous advantage. As a poet, I’m sure you know that sometimes you start writing in a mode or become fascinated with a topic: for me it’s like a fever—it’s all-consuming and a heady creative space to be in. When it’s over, I’ll think: “hmmm, what was that all about?” That was true for the poems in this book: the short illuminations at the beginning I wrote in my garden in the early morning, recovering from divorce. The “Desire” poems found me falling in love again (and quite suspiciously!). The column poems I composed in my kitchen looking out my back window, crafting them like vessels of pottery. The poems I entitled the vessel series were difficult and arrived sporadically, taking various shapes until finally settling. It looked like a mess, until a few years from writing them, I saw a framework, saw their progression and found a movement that I could give names—the manuscript was working something out, was expanding beyond me (they gained “velocity” I suppose).

Like my last interview subject, Matthew Hittinger, your poems are incredibly visual on the page. What are the motivations and challenges behind your line breaks and shapes?
Great question. As I mentioned, once I began writing in columns, I couldn’t stop: these in the book are only half of what I produced. The poems did feel sculptural (and I notice Hittinger said the same of his), and they also felt like two voices: sometimes a counterpoint, sometimes an echo, sometimes a bodied voice—sometimes a disembodied voice. I wanted to see what happens if you read something in a linear cohesive way (read down one column at a time), then in a non-linear disjunctive way (now read the same poem line-by-line across that empty space in the middle): it won’t make sense, but often, yes, it will. What I learned is to pay attention to each word more than I ever had before. Yes, I over-describe, and I’m too in love with adjectives, so I had to make necessary cuts to preserve some kind of “sense.” I liked the challenge that I gave to myself, and only hoped they’d be understandable! 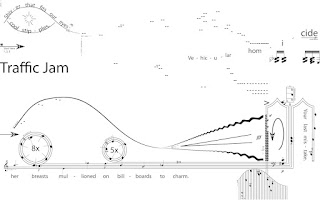 I’ve never seen anything quite like the final section of the collection, "Open Me: for Soprano and Piano." How did the collaboration with the music and drawings with Hunter Ewen come about?
I agree! I don’t think anyone has seen anything like the scores Hunter Ewen produced—in fact, he won a music composition award for them. Hunter is my step-son-in-law, and as part of his graduate program, he asked to score some of my poems. I can’t really call it a collaboration—independently, and fortunately for me, he saw those quick poems at the beginning in a visual form and scored them to highlight their subjects. He envesseled the poems in an entirely new way, which serendipitously furthered one of the themes of the book. You can see the performance on YouTube of the poems; he’s been doing other music and multi-media performances that are very exciting. Hunter also produced the background music to an audio recording of the book that readers can hear once they purchase it either on Amazon or from ninebark press. With the help of some of my friends (Muriel Cormican, Maria and Sebastienne Gerhardt-Grant, Kimberly Korobov and Della Wilcox), I recorded the poems in the book. Hunter heard each poem and some pieces I find amusing and many capture the inner tensions that throb there. I should mention that the other collaboration was with cover artist Seth Fitts, who read the manuscript, and produced a custom painting and collaged in two of Hunter’s scores. He revised the image with much equanimity after I gave him feedback, but everything in the painting is his vision: another imaging of many of the book’s themes. This kind of blending of art forms is happening everywhere, but I was happy it all came together in this way for this book. 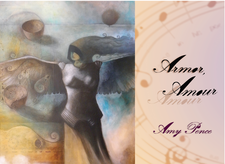 Talk about your experience working with small presses like ninebark, which published Armor, Amour.
The blend I just referred to couldn’t have happened without the amazing editors at ninebark press: Sandra Meek, Mike Meija, and Mindy Wilson. They saw the potential to make the poems and Hunter’s compositions and sounds into an artifact, and they worked very carefully and heartfully to achieve that goal. I heard Sandy Meek, poet and professor at Berry College, many years ago reading at Callanwolde, and I’ve always admired her work (her fourth book Road Scatter is out in September). Poets Greg Fraser and Chad Davidson introduced me to her when she read at University of West Georgia and I thank them for recommending my manuscripts to her. Sandy worked with me on some particularly clunky poems and they all read the manuscript and helped me make needed cuts. This time around, with this press, I see what a small press can do: painstakingly edit, design, oversee and produce a beautifully realized book. I hope we can continue to support these efforts by buying more books from small presses.

Name three poetry collections you’ve read recently that you can’t stop thinking about and would recommend to others.
I am looking forward to reading Sandy Meek’s book, and I just finished Betsy Brown’s Year of Morphines, a National Poetry Series winner. Betsy’s poems—some about the early deaths of her mother and sister from cancer—are precisely realized and show great depth. Though I read Jane Hirshfield’s Come, Thief about a year ago, and feel extra lucky to have interviewed her for The Writer’s Chronicle last fall (forthcoming), her poems have a clarity that allow her images to rise up as wise teachers. With my husband and some friends, I am also reading Lucretius’s The Nature of Things, after having read the book The Swerve. Although the Roman poet was writing more than two thousand years ago, he shows us the imperative to live fully and wholistically. As a follower of the Greek Epicurus, Lucretius invokes the gods and goddesses (the ones that Botticelli pictured in “Primavera”) to help free us from the oppression of religion and fear: the soul goes as does the body—all our pleasures are to be had not in an afterlife, but now.