In defense of James Joyce and "Ulysses" 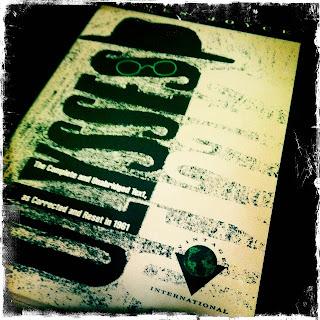 I've never been a fan of Brazilian novelist Paulo Coelho. I read The Alchemist back in the early 90s when it was first translated into English and it just wasn't my cup o'tea. He's sold millions of books and caused a stir last year by encouraging readers to pirate his work and was even uploading his novels to file sharing network Pirate Bay. Of course, he can do that since he's made a fortune from his writing, but that's a whole other blog post. This week, Coelho said in an interview that James Joyce's Ulysses was "harmful" to literature, basically all style over substance. Coelho has his own new book to flog, and saying something controversial – such as dismissing great works of literature – is always a good way to get your name in the papers and on the Internet.

Coelho is also quite full of himself. He's proclaimed himself a literary "wizard" and that his writing is the pinnacle of literature because he makes the "difficult seem easy." No ego on this one at all, is there? Of course, Coelho isn't the first writer to have a go at Joyce. Roddy Doyle, Dale Peck and the overrated Jonathan Franzen have all dismissed Joyce as too literary for the unwashed masses. Coelho goes a step further and proclaims that "there is nothing there" in Ulysses. This from the man who who basically recycled a fable from One Thousand and One Nights and claimed it was his own original fiction. That's The Alchemist, by the way.

I came to Joyce in the late 80s by way of the John Huston's film adaption of The Dead and Kate Bush's song "The Sensual World," which uses Molly Bloom's soliloquy from Ulysses as its inspiration. In fairly short order I read Dubliners, Portrait of an Artist as a Young Man, Ulysses and even wandered through Finnegan's Wake, which is surely the most convoluted novel ever written. And while Ulysses can be a slog, I've read it three times. I love the stream of consciousness, the humor, the flights of fancy Joyce took on writing this day-in-the-life of Leopold Bloom. Is it flawed? Yes. There are still parts of it that are enigmatic and full of personal meaning that flummox readers, but I like that. I don't want my literature to be cut and dry. I don't want easy. I want to be challenged by what I read. I want flawed characters without clear motivations and who are, sometimes, hard to empathize with. In one of the early reviews of my novel, Conquering Venus, the writer harangued about the character of Diane Jacobs and how unlikable she was, even calling her an "irredeemable cunt." It's still one of my favorite reviews, because the writer was so passionate about his hatred for this fictional character. Critics labeled the characters in Ulysses as despicable and there was even an obscenity trial in the US in 1933. But Ulysses is a giant in literature and I love it for all its meandering, dirty ways.

Anonymous said…
I am from Brazil and I hate Coelho with all my heart. Joyce should come back to Earth and explain literature in latin for him.
10:12 PM

Shannon said…
I read and liked the Alchemist, but let's just say it didn't touch something deep in myself the way "Portrait of the Artist as a Young Man" did. I've read Dubliners, but never Ulysses, though I have many, many friends who swear the uncontestable glory that is the latter.
12:03 AM

Rosemary Nissen-Wade said…
Oh dear. I loved The Alchemist (mind you, I was younger then) though I find most of his other stuff pretentious. I have enjoyed some of Joyce's writings, but as for Ulysses, I have tried a few times and can never get past page 3. (The same goes for Catch-22.) And I think the oft-quoted speech of Molly Bloom, 'my arms all perfume' etc, is a particularly silly and offensive male fantasy about women's sexuality. Nevertheless I agree with you about not liking just the easy and obvious. In case I come across as an inferior intellect, I hasten to add that my favourite novels are Middlemarch, Portrait of a Lady and The Brothers Karamazov.
1:47 AM

Collin Kelley said…
Shannon, I have a very special place in my heart for Dubliners, since that's what brought me to Joyce in the first place.

Rosemary, I've always found Molly Bloom's soliloquy to be the opposite. Molly is full of contradictions - very religious, but also very sensual and in tune with her body. To me, she is in control, a goddess, a wild interpretation of mother nature. But that's me.
3:17 AM

Malcolm R. Campbell said…
The Alchemist was interesting, but not as interesting as Joyce. Yet, saying something nasty about Joyce is like saying Shakespeare is a waste of time: it's bound to attract attention. Even those who have never read Joyce will nod in agreement rather like those annoying people who keep saying "right" during conversations about subjects they know nothing about.

P Maughan said…
I so agree - but when you were talking about overrated you omitted to mention Roddy Doyle. Dear God, how did literary Ireland arrive at that man? And poor Brendan Behan, whose true and wonderful talent gave us 'Hold Your Own and Have Another', turning in his grave at Doyle's feeble pretensions in 'Two Pints', or whatever the name of the wretched thing is. Peter Maughan
2:42 PM