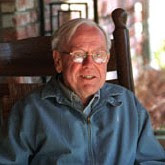 Dr. Ferrol Sams (Sambo to friends and family) died yesterday at age 90. He was my doctor from age 6, when my parents rushed me to his office in Fayetteville after I fell and hit my head on a door hinge, until he retired. I remember being fascinated by his old office. The entryway was a giant terrarium and you crossed a bridge over a pond filled with turtles and all kinds of exotic flora and fauna. It made going to the doctor a treat – almost.

Then, in the early 80s, Sambo published his first novel, Run With the Horsemen. It appeared on the New York Times bestseller list and won him awards and acclaim. The novel was based on his wild adventures growing up as a boy in rural Fayette County and featured his alter-ego, Porter Osborne. Sambo would write two more books chronicling Porter's life – The Whisper of the River and When All the World Was Young – following his days in medical school and in World War II. There were other great books, including his short story collections, The Widow's Mite and Epiphany. Sambo's creation of comedic scenes and dialogue were second to none.

He once told me he wanted Robert Redford to direct the movie version of Run With the Horsemen. Why it has never been turned into a film boggles my mind, but on the other hand I can also understand why. In the mid-90s, I quietly started meeting with Sambo to try and turn Run With the Horsemen into a play. I was fresh off winning two awards for playwriting, which impressed Sambo, so he gave me the go ahead to try and wrangle his novel into something for the stage. Run With the Horsemen is filled with memorable characters and moments, and some of those, sadly, had to be jettisoned to get to the heart of the novel - the relationship between Porter and his alcoholic, strong-willed father.

I worked on the play for months and finished a first draft. There were big set pieces, including a church scene that would have required a full gospel choir and another for the prom scene that would have needed a recreation of a courthouse square. I would meet Sambo at his office – then moved to the Fayette Medical Center – and he would give me notes and suggestions. In the end, the play just didn't work. Sambo missed the funny side characters and I couldn't convince him that it should be a drama with humorous moments scattered throughout. The play is still in my file cabinet with all our notes. I cherish it. Does anyone have Robert Redford's number? I still think it would make a great movie.

In later years, Sambo would begin every doctor visit wanting to know what I was reading and a suggestion that I should lose weight. Any visit with him – as doctor and patient or just as friends – would end with an hilarious story about one of Fayetteville's old families. Sambo was my great-grandmother's doctor, too, and he had a few choice stories about her as well.

Sambo and I read together at the Blended Heritage festival at the Fayette County Library almost every year for a decade. He also loved poetry and could recite Edna St. Vincent Millay's Renascense from memory. Sambo never failed to encourage my writing career. Another memory I have of him is from the mid-80s when I went to work as a cub reporter for the old Fayette Sun. To test me, the editor, Viki Brigham, sent me to a Fayette County Planning and Zoning meeting. I was 15 at the time. I was sitting in the old courthouse, clutching my notebook and looking scared shitless when Sambo walked by and did a double take. "Good god, boy, what the hell you are doing here?" he asked. I never told Viki, but without Sambo's help guiding me through that meeting, I wouldn't be a journalist today.

Thanks, Sambo, and I hope you are making them laugh on the other side. Your kindness, care, humor and wisdom will certainly be missed here.
Email Post
Labels: author Fayetteville Ferrol Sams Georgia novels Poetry Porter Osborne Run With the Horsemen

Maureen said…
What a wonderful connection you had with him! Thank you for sharing your memories.
8:03 PM

Lisa Nanette Allender said…
I knew he was your doctor and knew there was much shared between you two. These anecdotes illustrate that beautifully, Coll-Coll. :)
12:12 AM

Anjali said…
Sorry for your loss. He sounds like he was an extraordinary man.
7:53 AM

Rosemary Nissen-Wade said…
A man to be treasured, obviously, who enriched the world by his presence in it.
1:17 AM

Ann said…
Collin, Thanks for introducing me to Sambo several years ago in Fayetteville. it was a wonderful experience hearing him share his stories. I was so proud of you that night reading your poetery and can't wait to get your new book RENDER.
9:12 AM