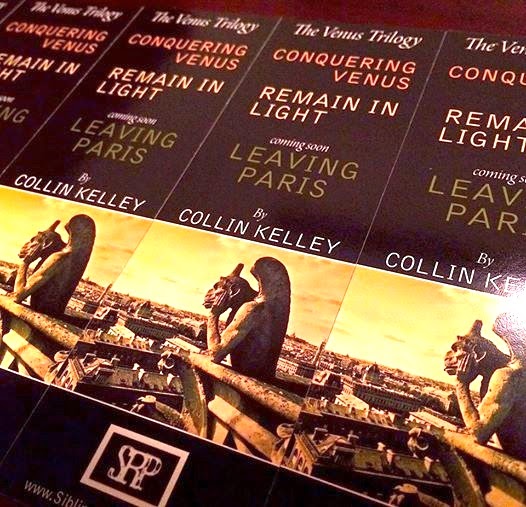 I noticed this morning that I hadn't posted on the blog since May 10 and figured it was time for an update. Along with a very hectic month at the magazine, I've been immersed in Leaving Paris. There have been numerous rewrites and revisions, false starts on new chapters and finding a balance between the literary/magical realism of Conquering Venus and the more mystery/suspense tone of Remain In Light. Finding that balance has been tricky. But I knocked out two new chapters this weekend and feel like I'm on the right track again.

While Leaving Paris was supposed to be out in fall 2015, it's more than likely going to be early 2016 at this point. That takes some of the pressure off me and will allow Sibling Rivalry Press to properly market the book. I know those of you who have read the other two novels are eager to find out what happens in this final story, but I promise you it will be worth the wait. There's some great stuff with Diane (whose story takes place entirely in Memphis) and the shifting dynamic between Irène and Martin a decade after their first meeting. If you haven't read the first two books in The Venus Trilogy, you can buy the eBooks or paperbacks at this link.

I've only got two events scheduled before summer begins: the reading of Walt Whitman's "Song of Myself" on May 31 at Java Monkey in Decatur and I'll be on a panel of writers at the Self-Publishing Seminar being hosted by Georgia Center for the Book on June 7. While I'm in London for the Kate Bush shows, I'll also be reading at the Polari series at Southbank Centre again. I'm honored to be invited back by Paul Burston and can't wait to be back on the stage to share work from Render, as well as new material.

Jennifer Perry said…
Looking forward to reports from your next trip to London!
3:26 PM