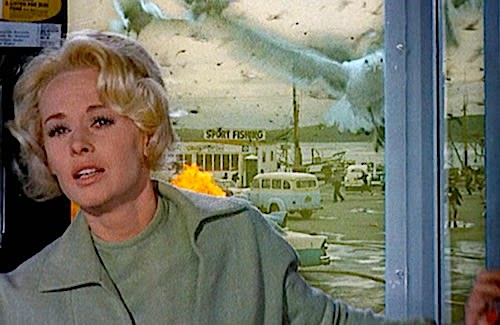 The new issue of Animal: A Beast of a Literary Magazine is now online and features my poem "The Beat of Black Wings".  I originally wrote the poem back in 2011 to be read during a World AIDS Day event at the Museum of Design Atlanta, which was exhibiting Graphic Intervention: 25 Years of World AIDS Posters. I've tinkered with the poem a few times since then and it's become part of my ongoing series on women in film – in this case Melanie Daniels from Hitchcock's The Birds. Many thanks to Stephen Mills and Animal for giving this poem a home.

I was also thrilled that my poem "Wonder Woman" got a mention in a fantastic review of the Drawn to Marvel: Poems from the Comic Books anthology.
Email Post
Labels: AIDS Alfred Hitchcock Animal comic books Drawn to Marvel film literary magazine poem Poetry The Beat of Black Wings The Birds

Rosemary Nissen-Wade said…
I love it! "Imitation is the highest ..." I'm definitely going to have to copycat this form!
7:39 PM