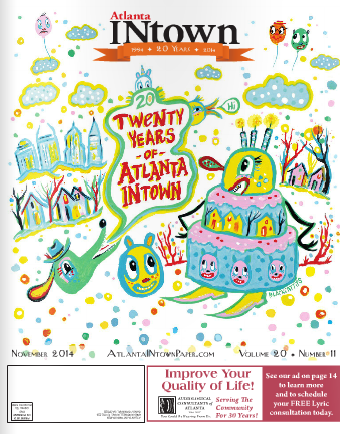 I'm not sure where this month (or year) has gone, but the last few weeks have been insanely busy. Here are a few updates.

The Georgia Literary Festival has been postponed until November 2015 due to funding issues. It was originally supposed to take place Nov. 7-8 in Augusta with keynote speaker Jessye Norman. I'm not sure if I will be a guest author next year or not, but I'll keep you posted.

Sibling Rivalry Press founder Bryan Borland has stepped down as editor of literary magazine Assaracus, but he went out on a high note with a special issue featuring some of the best work I've read in ages. I'm thrilled to have a new poem included. "I Was Letty Mason." You can order a copy at this link. The fab poet Joseph Harker is the new editor and he's already hard at work on the next issue.

I don't usually talk about my day job as the editor of Atlanta INtown, but the project I just completed took up the last five months of my life, so I'm posting about it here. The 20th anniversary issue of INtown is out now and you can read the digital edition at this link. I have worked at the newspaper for 12 of those 20 years, so putting this issue together – going back through the archive, choosing photos, etc. – was a big trip down memory lane.

Best show you might not be watching: Transparent, which was produced by Amazon Studios. Jeffrey Tambor is heartbreakingly good as the sixty-something professor who announces to his family that he is transgender. He deserves an Emmy and so does Gabby Hoffmann, who is brilliant. Watch it!