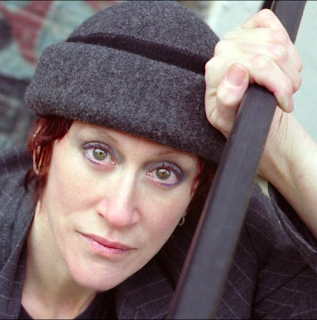 Poet, musician and activist Jackie Sheeler died in New York City last week. The news came, as it so often does these days, via Facebook. I hate Facebook. Jackie did too. The day before she died, she announced her plan to leave the social media platform that has so willfully sold its users out to crooked politicians, hackers, opportunists and hostile adversaries. Jackie would want me to remind you of that, and so I have. But this post is about beloved Jaxx – my fierce, brilliant, opinionated, no-bullshit friend.

In 2004, my debut poetry collection had been out less than a year and I was trying to book a gig in New York City. I can't remember who suggested getting in touch with Jackie, who was the host of the Pink Pony Reading Series at Cornelia Street Cafe, but I got her email and, with little hope, sent her a note. A day or two later, Jaxx responded with an invitation not only to read at Cornelia Street, but to join her at the Bowery Poetry Club as well. When I spoke to her on the phone about my travel plans, she told me I was crazy for booking an expensive hotel room. "Are you crazy? Come and stay at my place." And so I did. Jackie's walk-up in Harlem would became my home-away-from-home for my many subsequent visits to NYC. There would be plenty more invitations to read at Cornelia Street and other gigs Jaxx was involved in. She was generous in ways so many poets are not, especially in championing new voices and giving them space. She thought the "po'biz" scene was bullshit and many of the poets involved in it were boring, self-important assholes. She was most definitely right about that. 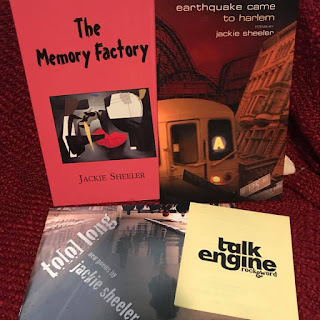 Jaxx loved her apartment in Harlem. It was rent-controlled, steps from the subway and she loved the mix of people in her neighborhood. She believed in supporting the bodegas, the local restaurants and was livid when one of the big banks opened a branch on her block. Her apartment was full of books and music, great art and a giant, over-priced yellow leather couch. She loved that fucking couch (she even wrote a poem about how much she loved that fucking couch). I had the honor of sleeping on that fucking couch, as well as laughing, crying over love affairs gone wrong, and staying up late to gossip, talk poetry and politics or listen to music. Especially Patti Smith. Jaxx was inspired to create her own band, Talk Engine, which produced some fantastic personal and political music revolving around her poetry.

On one memorable trip to NYC, Jackie took me to an AA meeting. She was very candid about her addictions and during that visit she was on the verge of falling off the wagon. She was going to meetings twice a day. I was touched that she felt comfortable enough to ask me to go. On another trip in 2008 just before the election, we phone banked for Obama. She would later become disillusioned with Obama and was a big Bernie Sanders supporter during the last election and was even profiled in The New Republic. Jaxx was a one-woman political action committee and she wasn't afraid to argue her points.

In the last few years, Jaxx had turned her attention to rescuing stray cats in Harlem. She was forever posting photos and stories of braving sub-zero weather or rainstorms to coax out a frightened kitty. Finding homes for the rescues was a top priority. Jaxx didn't care if you thought she was a crazy cat lady. 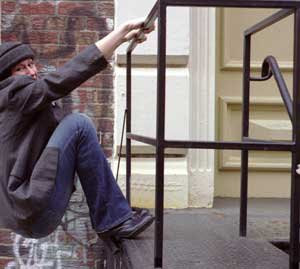 And, of course, her poetry was brilliant. Her collections The Memory Factory (Buttonwood Press) and Earthquake Came to Harlem (NYQ Books) are, as her mentor Ellen Bass said, "vivd, compelling work." (You can read my interview with Jaxx about her poetry at this link) Jaxx's past was filled with harrowing tales of molestation, rape and living as a junkie on the street. She had the strength and determination to turn her life around, and was big in the IT world. When I met her, she was the director of employee support at Yahoo's headquarters in Manhattan. In her spare time, she was tteaching poetry to inmates at Rikers Island prison. She also kept up Poetz, a calendar of all the poetry open mics and readings happening around the city.

It's a cliche to say it, but it's true: a bright light has gone out of the world with Jaxx's passing. I am so glad I met you and was invited into your world. Oh, my beloved Jaxx - this world will be a darker place without you. I will hold all of my happy memories of you close. I love you, Jackie Sheeler. New York will never be the same without you in it.


I was a weird kid, did weird things, the boys on the corner
made weird-girl jokes about me. All of them were true.

One afternoon, at Slat's house (her furious
mother hollering, as usual, downstairs), stereo

cranked and trembling, we discovered the power of weird
in a little-girl street voice that swiveled around to speak

with itself, cursing what it would curse, hurling mysterious
lyrics into the humdrum air of a Brooklyn apartment. The mother

nearly lost her mind: we played Land so many times
our hands could find the right groove on the record

without looking, even as stoned as we were.
How many hours had passed? Enough to blow through a lid

of Mexican Green, enough for the sun to disappear, enough
to read every world on the album cover twenty times over

and run our fingers again and again across Patti's black
jacket and spotless shirt, across her face, mesmerized and unashamed.

This wasn't music, it was permission – a bomb blasting should into shreds.
We walked into Slat's pink poster-covered bedroom

two nerdy girls who never could never would fit in,
and walked out of it women who didn't want to.

Devin Michaels Martinez said…
Thank you for sharing your story! It made me smile--she was not only a mentor for me but a mother figure. I will forever miss her.

Collin Kelley said…
Thank you for reading this, Devin. She touched so many people. Jackie was extraordinary!
11:11 AM

Stella Padnos-Shea said…
Jackie is so missed, a staple of the NYC poetry community. She took the word "community" seriously. Love, Stella
12:00 PM